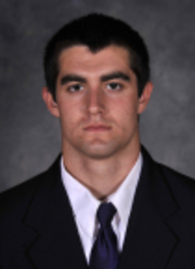 In fall of 2013 I will be a 6ft, 7in, and 238lb, and red-shirt junior, left-handed Pro-Style quarterback.  I have spent my red-shirt year at the University of Nebraska working on my Finance major and getting faster, quicker and stronger.

I was the starting quarterback in my sophomore year at Western Carolina University.  Near the end of the opening game against Georgia Tech, I sustained a grade three separated right shoulder, not my throwing shoulder. The coaching staff felt I was the best QB option, even w/ an injury that should have kept me out of the line-up for a number of weeks. I played for 6 games with additional injuries until they took me out and put me on injured reserve to recover.  I went back in the final two games of the season.

The video attached is from my injured sophomore year.  I posted respectable passing numbers given the extent of my injury, but not up to my standards. Specialists have examined my shoulder and all agree I am physically fit, at full strength and ready to play. (Records are available upon request).

I transferred from Western Carolina University; I enjoyed my time at WCU and had planned on completing my four years there. At the end of the 2011 season; most of the coaches at my WCU were replaced. The new coaches are from Appalachian State. I worked hard with the new coaching staff and learned a great deal about reading protection and defense as a duel-threat quarterback. I respect the coaches and their vision, but unfortunately I do not fit their quarterback profile, they wanted a running back that occasionally passed. When I asked for my release my Head Coach - Coach Mark Speirs, my Offense Coordinator/Quarterback Coach - Coach Brad Glenn said that they would give me an excellent recommendation to any college looking at me as a potential player.

I played in several games as a true freshman in 2010 and earned the Southern Conference Freshman of the week for my start against The Citadel. I was the starting quarterback for the 2011 season. I passed for 1,697 yards and 12 touchdowns; I have an efficiency rating of 124.6 according NCAA Football Scoreboard.

I bring a passion and fortitude to the team; I am a student of the game. I spend a great deal of time watching film. I have proven flexibility commanding different offenses. I have faced adversity. I don't quit. I seek challenges and I know that I can compete on the D-1 level. I started my first college game at the age of 17. I have set records, achieved awards, received national recognition and won a championship (at Montini High School). I am a mentor and leader. I have learned from my mistakes and I make every effort to improve my skills on a daily basis.