College Coach? Click here to view all of Bradie's information. 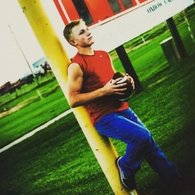 I originally played 8-man football at Kremlin-Hillsdale High School.  I was a full-time starter on both sides of the ball my first two years. My freshman year I was starting halfback and outside linebacker.  My sophomore year I was the starting strong safety and starting Quarterback. We made the playoffs in both seasons, which were the only two years our school made the playoffs in the past 20 years. I was an All-District player on both sides of the ball in both seasons, and a two-time first-team All-District Academic player. Over the summer before my junior year, I was invited to the Pro Football HOF Academy in Canton, OH. It was there that I was encouraged to put myself into a more competitive environment academically and athletically.

The beginning of my junior year,  I chose to transfer to a larger school.  This gave me more opportunities in both the classroom, and on the football field, since this moved me to 11-man football.  This decision was best for me and my aspirations to play college football.  Due to OSSAA rules and regulations, I chose to sacrifice a year of eligibility to transfer to Chisholm High School. I got to play at a higher level of football, join a better weight program, and I had my first opportunity to take honors classes.  In 2 1/2 months of off-season training I raised my bench max by 40 pounds, my squat max by 55 pounds, and my power clean max by 60 pounds. I've put on an extra 15 pounds and shaved .2 seconds off my 40 time. In the classroom I've taken 2 honors classes and have still kept up a 3.95 GPA.

I was a full time JV player, during this time since I was ineligible to play true Varsity due to the transfer rules. I started in every one of my four eligible JV games. I played both sides of the ball in the first three. On offense I racked up 720 total yards and 7 touchdowns. On defense I played strong safety and had 26 tackles, 2.5 sacks, 5 PBUs, 2 FR, and 1 touchdown. In my fourth JV, playing only the first half of the game, I was only used on defense where I had 9.5 tackles, 2 TFL, and 2 interceptions.

It took a lot for me to give up a full season of high school football. It was probably the toughest decision I've ever made in my life, but I'm glad I did it. It's made me a better player mentally, a more talented athlete physically, and has given me classroom opportunities that I didn't have before. Most of all, I think it gave me a better appreciation of the game. I plan to show how much I've grown because of this in my senior season and I promise I will hold myself to a higher standard and play to the best of my abilities.