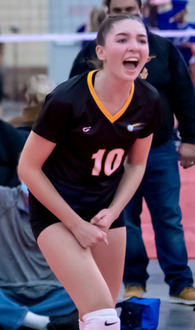 Being selected as the only player from Oklahoma for the USAV National Team Development Program (NTDP) 2021 Summer Training Series is so far the highest accomplishment of my volleyball career. I am excited to train and compete with the Top 73 girls in the country in the U15/U16 age group in Anaheim, CA this summer. Hopefully, I will continue to be selected for this elite training opportunity over the years to come.

Playing with bigger, faster players has always been an aspect of my volleyball experience. As a nine-year-old, I played my first year on an 11U team. This year, I skipped 14U and played on 15U as a six-rotation player, competing in Open Division in several National Tournaments, and earning the honor of Captain. I have been named Captain each of my volleyball seasons, both for school and club, and it is leadership on the court, in the classroom (GPA: 4.0), and in social life that I hope to bring to your volleyball program.

I have also had the good fortune to excel at Beach Volleyball, and am currently ranked as the #1 player in Oklahoma at my age. Most recently, I played up an age division and won the 2021 OKRVA Beach Volleyball U16 State Championship. I have qualified for multiple National Championship events (e.g., USAV, AVP) each year that I have played. In the fall of 2020, my partner and I placed 3rd at the AVP East Coast Championships in Clearwater, FL. Our only loss in the 3-day tournament was in the semi-final to the tournament champion. Beach has contributed to my indoor game immensely, especially with shot selection and placement, and court awareness.

Finally, one of my biggest attributes is my competitiveness. Many people will say they hate to lose, but for me loss is a visceral experience. My father will say one of his fondest memories was of me when he was my Coach in the 5th grade and I took over our championship match. I was advanced relative to my elementary school teammates, and several still had not developed the instinct to move to the ball. Therefore, I found myself running all over the court, sliding, diving, and getting some bloody knees and elbows along the way. It was not my intent to play other girls' positions, but it was my intention to do everything I could to prevent us from losing, and in the end, we won! My competitiveness has evolved into trying to outsmart my opponent by reversing the court, reading middle blockers, and not going with the easy set. Chess is a hobby of mine, and I love playing it on the volleyball court as well!