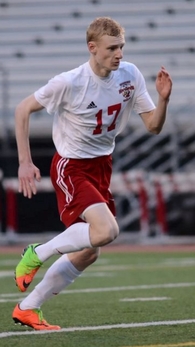 Hello, my name is Ryan Smith and I play for Eastside FC B01 Red, a nationally ranked team located in Washington State. My team has won the Davis Legacy Cup, placed third in National League, won a state title, competed in many Surf Cups, and advanced to the Quarterfinals of Regionals. My primary positions are striker and winger (outside midfield), and I usually alternate between the two in games, making me a versatile attacking player. For my high school team, I primarily play at striker, where I received Second Team All 4A KingCo my Sophomore and Junior year.

I am currently recovering from a torn ACL in my left knee, which I tore halfway through my Junior high school season. My patellar tendon reconstruction was successful, and my recovery process is going very smoothly and efficiently so far. I will be able to play again in March of 2019 for my Senior year of high school. Because I am unable to showcase myself at any tournaments or ID camps, I highly recommend that you check out my video which will tell you a lot more about me as a player.

To describe myself as a player, the word I would use would be versatile. I have a good right foot that provides great service off of crosses and longballs. I can play make, but I am also always looking to get in behind the defense. I can finish off plays and most importantly score goals from in and around the 18, as shown in my video.

My character is a large part of what has gotten me to this point in my soccer career. My dad was a large part of my success as he trained me and gave me the ability to join an elite club such as Eastside FC. When he passed away my freshmen year of high school, I had to show my resilience and further my game even more. After many age group changes and new coaches, I had to adapt to every new team and coaching style, forcing me to become a very coachable player. Now with my ACL tear, I will need to demonstrate the same character that has been built up throughout my life so that I can come back even stronger on the collegiate level.