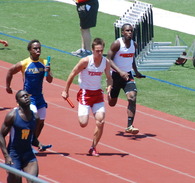 
During My junior year, I was elected team captain of the Varsity track team, and our Boys varisty won Sea View League Champions and went undefeated the entire season. Towards finals, however, a minor muscle pull one week before finals prohinited me from competeing in the most important and fastsest stage of my junior season. I was awarded "Most Outstanding Sprinter" on the Varisty Boys team.


I also carry a 4.6 Academic Semester GPA, and a 4.17 overall weighted Academic GPA. My SAT score is a 2040, with 690 Math, 630 Reading, and 720 Writing. I have been awarded the Superintendent's Honor Roll every semester in high school. I was also ranked in the top 6% of my class as a junior, prior to Tesoro's change to a "Decile Ranking" system, in which I am currently ranked 1. I am interested in Math, Science and English, however I have not decided on a major.  I would love to attend a college where I can challenge myself both academically and athletically.


Throughout my entire life, I have had the desire to work as hard as I can at everything possible.  I believe that once a hard-working person can find something they love, anything is possible. Motivation and work ethic are what set individuals apart, and nothing can stand between someone and his passion to pursue something he loves.