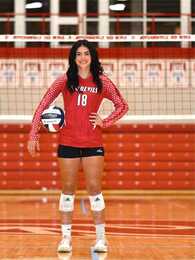 I've grown up around and have played sports my entire life.  I have 3 older siblings who played high school and college athletics.  My oldest sibling, my brother,  played D1 basketball at Purdue University as a preferred walk on.  My next oldest sibling played Varsity Volleyball and has coached both Club and High School Volleyball while currently attending University of Louisville.  Also, I have a sister who was a 4 year starter on Varsity soccer during high school and plays soccer now at Wabash Valley College, while also trying to be recruited to a higher level.  Additionally, my dad was a Varsity Basketball Coach for more than 20 years in Indiana and played D1 Baseball at Valparaiso University.  My mom is my biggest fan and supports all 4 of us kids in anything we do.

As you can see, my family has led me down the path of sports.  I've played many different sports, but Volleyball is the one I love the most.  My goal is to play at the highest level I can and still be successful and an asset to my team.  I have seen what it takes to play at highly competitive levels while taking college courses, and I believe I can do it.  I've witnessed first hand what coaches go through with my Dad and my siblings. I know what it takes to be a good representative of a team, and how important it is to be coachable and to learn from coaches.

One example of being coachable that I want to share is this:  I started playing volleyball in middle school as a setter.  Then, on my first competitive Club Team, at 13, I made the 1s team.  My coach for this team happened to be a very successful High School Varsity Coach who already had another player as our setter, so he wanted me to be a hitter.  I learned to be a hitter that season.  The next school season, I was back as the setter of my team.  The following year in club, though, I wasn't sure where I best fit, so I sort of drifted back and forth between both setting and hitting during club tryouts.  Then, my freshman year, I was given the opportunity to go in for our senior libero on Varsity during an early season tournament where our team wasn't playing well.  I never considered myself or felt strong as a passer, but I got in and gave my best.  From this day on, my Varsity Coach has played me as our Varsity Libero.  As a result, this is where I've remained in both high school and club ball.  So, even though I thought I wanted to be a setter, like my sister, I listened and let the coaches around me lead me to where I am now.  This shows that I am willing and able to learn new things and work hard wherever I am needed.