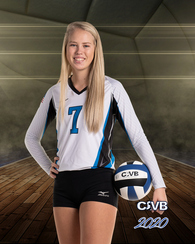 I have competed since I was three years old.  For ten years, I was on a competitive dance team in which we won many awards, including a National Championship in 2016.  After ten years, I decided that I wanted to focus solely on the sport of volleyball.  I had played for our local recreational volleyball teams a couple of years, but decided to really dedicate myself in the 8th grade by trying out for my middle school team.  The team ended up second in the region.  Afterwards, I tried out and made a club team and was selected first team all region after playing one year.

My freshman year, I was a starter on the Junior Varsity team, which went undefeated in our region.  I was selected as the offensive MVP.   I was also the only member of the JV team that was asked to move up to Varsity for the playoffs.  We were fortunate enough to go on and win the South Carolina AAA State Championship by defeating Bishop England, a team that held the nation's longest winning streak at 18 straight State Championships.  It was an exciting moment that I will never forget.

This past school year, I was the starting middle for varsity as a sophomore.  We went undefeated in our Region and advanced to win our second South Carolina AAA State Championship!

This past club season I played for Carolina One 18U Select.  Our season was unfortunately cut short due to COVID19, but in the six tournaments we played in, we made it to the Gold Championship 5 times, winning 2 of those.  We finished with a record of 12-2 in our region.  I was also named to the JVA Ultra Ankle Watch List for the second consecutive year.

I would love to eventually play for a college team.   I am a very dedicated athlete and student, spending much of my free time working on improving my skills through private lessons, as well as strength and endurance training.  I am also an honors student that takes academics very seriously.

I'm a hard worker, quick learner and I am also a very loyal teammate.