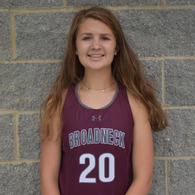 Entering high school as a goalie, I found myself competing against 3 other goalies for the JV spot alone - and was perceived by some as the underdog.  Every second of every practice and every  game I put in 100% effort to make myself the best that I could be. This hard work resulted in giving up only 3 goals my entire freshman season. I entered my sophomore year stronger both mentally and physically, recognizing that I had a lot to offer as a goalie to my team. As a result,  I was made a captain and a starter, and focused on my role as a leader on JV.

As I approached season for my junior year, I sought camps and clinics that would teach me and grow me even further as a goalie. This enabled me to enter this season as a valuable asset to the team, leading the coach to carry 3 goalies on varsity - myself, another junior, and a senior.  As the season started, I found myself backing up the senior goalie and this time on the sideline proved valuable.  It allowed me to gain additional in game perspective from observing different offensive and defensive strategies helping inform the starting goalie as well as myself of key adjustments needed when entering the second half of games. While other goalies may have been frustrated by not getting a lot of game time, I believe this really helped me to build my character, especially as a team player. I strove to support and encourage my fellow goalies, as well as the entire team, as we went on to be the Regional Champions for the first time in six years.

I have found that the time that I spent working hard to be the best has driven me not only athletically, but academically as well. I have learned that hard work and self advocacy are an important part of achieving the goals I set for myself. I have high expectations for myself both on and off the field, and I am eager to take on the challenges I must face in order to meet those expectations. I am a very strategically-minded individual who loves puzzles and is able to see both the small details as well as the bigger picture. On the field, this translates into being able to see plays as they come down the field and direct my team towards an appropriate and effective plan of action. In addition to being strategic, I am a leader both on and off the field. While in the cage, I am extremely vocal with my team and am not afraid to take action. In the classroom, I am always ready to help classmates and even took on the task of starting a new club called Kids for Wish Kids, which benefits the Make-a-Wish program in the MidAtlantic region.

Simply put, I believe that having a can-do, team-centered attitude, combined with a desire to be successful both on the field and in the classroom makes me the perfect fit for your program.