College Coach? Click here to view all of Branwen's information. 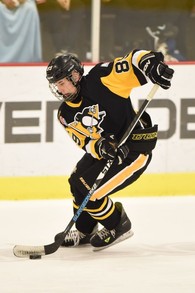 I have always had a profound love for hockey. Every chance I have, I work on my hockey skills and game. My goal is to play in college while obtaining a degree in Global Studies, and eventually play professionally. Although I also played soccer since age 4 and ran cross country for my middle school, hockey was always my true passion, and over the past couple of years I turned my focus to that.

What really reinforced my love for hockey was playing in the Québec International Pee-Wee Hockey Tournament. That was my first taste of playing in front of such a huge crowd, and that feeling, that excitement motivated me to skate like never before. It was an amazing experience and made me realize that hockey was what I wanted to do for a living. Years later, I attended a D1 college hockey game. The atmosphere was electric and further inspired me to play in front of fans like that at the collegiate level someday. Since that moment, my life has been primarily hockey, academics, and music. Hockey drives me to do well in school and achieve high marks that will help me continue my education in a good college. I am a member of my school student council, as well as the National Honor Society. I play multiple musical instruments and love to produce music. In addition to balancing these activities, I always find time to practice hockey on and off the ice.

Playing many years of AAA hockey has taught me how to be a leader. I have been an alternate captain on two of my teams. It also has taught me how to win. For the last two years my team won the MidAm District Playoffs and placed third in the 2017 AAA National Championships and eighth at Nationals the year before. At the time, I considered these competitions to be the highlight of my career. However, I since realized that the peak of my game had not happened yet. But that would not come without some hardship. Unfortunately, this season I did not make my first choice of teams. Changing clubs really affected me and caused me to doubt if I could progress in hockey. But after the initial shock, I decided to work harder on and off the ice to become an even better player. During the off-season, I played in the College Open Division of the Senior Chowder Cup and attended a Junior Combine. From these experiences, I developed an absolute love of playing with older, faster, bigger kids. My speed and physicality allowed me to easily transition to their game, and I learned the differences between amateur and junior play.

Since then I have looked at the positive - that I could lead a less-experienced team, use my extreme speed to heighten my game and perfect my skills, and have the flexibility to play for my high school, an experience that I am truly enjoying. Currently I am an alternate captain of my AAA U16 team, play up with the club’s U18 AAA team whenever possible, and play on the top line of my high school varsity team. A past coach described me as “an offensive defenseman with strong skating abilities that can play effectively in both ends and has a little edge to him.” I have adopted this and taken it to heart, and added a leader on and off the ice to that description.

Through the lowest times in my career, I gained a stronger work ethic and decided never to give up on my goals. There is nothing that I won’t do to be able to play on a collegiate hockey team and obtain my degree at the same time. As a highly skilled and passionate hockey player, excellent student, musician, bilingual speaker, and two-time team captain, I know that I can make an impact on your team.