College Coach? Click here to view all of Daniel's information. 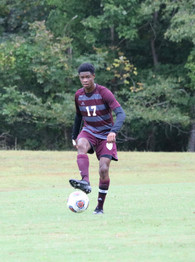 My name is Daniel Pintard, class of 2021 at Virginia Episcopal School and I am from Nassau, The Bahamas. I have been playing soccer since I was 5 years old, participating in recreational soccer in Freeport, Grand Bahama, The Bahamas.  When I was 7 years old I moved to Nassau and began to play for a club, Dynamos FC.  I began to improve and fall in love with the sport as I grew up. Around the age of 11, the idea of me joining the Youth National Development program began to materialize more and more.  In my first attempt, I was selected to participate and had not cut to continue in the program, but this did not stop me. Year after year, I kept on and continued to try out, hoping to break through to the next stage of cuts. When I was 13, I joined the program, but the program had their minds set on building a U17 National Team to participate in a placement Tournament in Suriname.  As a 13-year-old, training and playing with 15-17 year-olds, this gave me probably the hardest challenge for me and was mostly one of the biggest stages of development for me. Realistically, no kid from my age group were seriously considered for making it to the final stage of the program.  Even though I had not made the Reserve or travelling squad, I still found myself in the last 25 players to be considered for the team. This result was astonishing considering that I had not joined the journey to make the team but really to receive quality training and learn important lessons about football. This experience built a solid foundation for me on what high-level football was like and gave me a great preparatory education when I tried out for the U15 National Team at 14. Yet again odds were against me considering my fragmented relationship with the coach of the squad and the coach's favorability of an younger team that he could develop, but through hard work and strong perseverance, I placed 17 out of 18 on the squad that travelled to IMG to participate in a CONCACAF placement tournament.  And because of my placement on this squad explains why I sport the number 17 on the pitch. It symbolizes the underdog in me. In the same year of me going through the process of trying out for the National Team, I was also blessed with the opportunity of possibly playing soccer at Virginia Episcopal School. The coach who I had played under in my first spell in the Development Program made multiple connections before he gained contact with the head soccer coach at Virginia Episcopal School, Derek Harrington.  So the summer of 2017 was eventful. I had faced challenges while at the tournament at IMG that resulted in me gaining far less playing time than what should've been issued to me. But I proved this was an error in the judgement of my coach when he put me in for the last 15 minutes of our last match of the tournament against the Turks and Caicos Islands. We beat them 5 goals to 1, two of which I had assisted.  Immediately after the week of the tournament, I made the move to Lynchburg, Virginia.

For the past 3 years, I have spent at VES, I have grown as a soccer player through my coach for my Freshman and Sophomore season, Derek Harrington and even more through the tutelage of my club coach, Craig Palladino.  This growth then allowed me to receive my second International cap for a special select U17 National Team that was formed to play against  Florida's ENCL select team of state-recognized players. In this match, I scored the final goal which put us to a loss of 4-3.