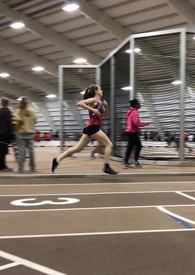 Athletically, I have played at the highest level of most sports, including soccer, track, basketball, lacrosse, swimming, etc.  Regarding soccer, I was the Team Captain for PA Rush from 2016-2018.  At PA Rush, I started every game as center defender and was never subbed out of any games.  My PA Rush Team played for the Pennsylvania State Cup Championship, and unfortunately we finished runner-up for the championship both years.  I was then offered a starting position for FC Bucks to play at an ECNL level.

Upon coming to FC Bucks, I have started every game for the club, sometimes as outside back, other games as center back and also as "stopper."  Since coming to FC Bucks, we have played 6 games in the 2019 fall season and have a record of 4-1-1.  In those 6 games, we have had only one goal scored against us, which was scored during a 3 minute time when the coach took me out for a quick break.   My FC Bucks coach has also had me play "up" for his 2003 ECNL team.

I moved to the Ukrainian Nationals 04 "Black" team for the fall 2020 season.  We are playing in the competitive Girls Academy league and will be playing in some of the most competitive tournaments in the country.  In my first game with my new team, I was recognized as the "outstanding player of the game,"

I was one of only three girls to start as a Freshman for the JV team at Central Bucks East.  My high school team went undefeated and we won our league, with a record of 17-0-1.  In 18 league games, we had 14 shutouts.  The goal differential for the season was 68-5.  There was not a single goal scored on my side of the field in 18 games.  I won the "player of the game" award twice during the season for goal saving plays that kept shutouts.

Academically, I aspire to become a Medical Doctor.  I take every Honors course offered for my high school and have a GPA of about 3.9.  I graduated from middle school with honors.  I earned the Presidential Award for graduating in the top 10% of my class.  I received the Citizenship Award, which was voted on by my peers for the student who most exemplified the pillars of student excellence.  In my first semester of high school, I was nominated by my Honors English teacher to be the moderator for a presentation in front of my entire grade called "Tour of the 20th Century."  I was also nominated by my Honors History teacher to moderate the same program for the subsequent presentations.  I am committed to receiving outstanding grades, I was on junior honors society and will also be a member of the national honors society in high school.  In every standardized test I've taken since 3rd grade (the year the standardized tests started), I have only received "advanced" marks.

I received the "Rookie of the Year" award for my fist high school track season, as the most outstanding new runner at Central Bucks East high school.

I ran my first 5K in September of 2019 and finished 3rd out of 141 girls in the 11-19 age group.  I also finished first in the 3K for kids race in Doylestown, called the "Kids Castle" race and set the event, course and meet record for the fastest girl to ever participate in the event.

My soccer coaches regard me as the quiet leader because of my dedication and outstanding work ethic.  I give 100% effort not only in games, but at practice and in training sessions.

Yes. I take every honors course offered at my high school