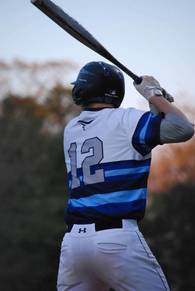 I am junior in High School and I am interested in playing baseball at a collegiate level in 2020.

I attend the Early College at Guilford in Greensboro, NC, but I play baseball for Grimsley High School. Last year, during my Sophomore season, I led our conference with a .474 batting average, which was 14th-best in the State among 4A high schools. I was also selected to the All-Metro All-Conference Team and received an honorable mention on the All-Area Team after the 2017 season. Lastly, I competed on the NC Colt All-Star team, which participated in the Colt World Series in Lafayette, Indiana.

I love baseball because of the rush after hitting the ball hard, making a diving play or striking someone out, and because of the team bonding. There is no better feeling than becoming family with my teammates and getting congratulated after doing something special. I love baseball, and I am willing to work hard to keep playing at the next level.

Over the offseason, I trained rigorously to improve my speed, exit velo, and throwing velocity. I saw great improvement as my fastball went from 81 to 85, and now higher, and my exit velo went from 86 to 92. Currently, I am just beginning to play High School baseball, but I also play for Five Star Carolina, which will be competing in national tournaments this year, including East Cobb. I realize that academics are a priority, though, and I have kept on top of my grades, maintaining a 4.3 GPA weighted and a 3.6 unweighted at the #1 academic school in NC. In my first two years I passed five AP exams in U.S. History, Environmental Sciences, Language and Composition, Calculus AB/BC, and World History (scoring 5's on Calculus and Language and Composition). My PSAT is a 1430 and my PACT is a 31.

I feel as if I would bring a collegiate program strong abilities at pitcher and 3B due to my strong work ethic and a passion for spending time to get better. I believe that I help every team that I am on, but if I didn’t, I would work hard until I did. It is a big goal of mine to improve my team and eventually lead them to a championship.

Top NCSA Athletes at The Early College at Guilford