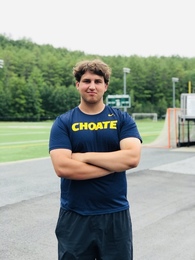 I see myself in three different parts; a person, student and athlete.  Although each of these parts are separate, together they have made me who I am.

I’ve always been known as “Big Mike.” Currently, I stand at 6’4 and weigh 275. I typically have a smile on my face and enjoy sharing my sense of humour with others.

For myself, words of importance are character and leadership.  Since I was young, I have always helped others in need and I have been a positive role model to both my classmates and teammates.

Knowing that the game of football will come to an end at some point for me, it is critical that I have a strong academic background to rely on. I’ve been an Honour Roll/Dean’s List student since my early years in school, and I continue to earn academic school leadership awards each year. Two of my most prized awards thus far have been receiving the Edith Grant Memorial Trophy and the Grade 9 Merit Award Pin in my first year at St. Andrew’s College. The former was awarded to me as the "New Boy" in Macdonald House (my grade 9 residence) who has shown the greatest improvement towards becoming the ideal Andrean, and the latter was awarded to me for academic merit.

Eight years ago, when I started playing football at the age of seven, I had absolutely no idea what I was doing. I didn’t understand the game, and I didn’t know any positions. The coaches placed me at Center. The one thing I realized early on was that nothing could happen until I snapped the ball. The quarterback couldn’t pass, and the running back couldn’t run, unless and until I successfully snapped the ball.

Although I didn’t really like that position, I learned a lot from that first year of playing football. I learned that:

1. Each position is important

2. Although there are other positions that I may like in the future, I needed to focus on my current position and its place on the team

3. Practice did make me better

Fast-forward to eight years later, I look back at, and I am proud of, what I have accomplished

1. I’ve been named Captain of my team almost every year that I’ve played the game.

3. I have been asked to move up to the Varsity level one year early (I will be 3 year varsity letterman)

4. I’ve helped others who are less experienced to understand the game and to get better.

Just as I have helped others, others have helped me. I’ve had the opportunity to play at multiple positions. This has helped me learn about and understand the game that much better, and has made me a better player at my current positions.

I continue to be thankful for the successes that I have had, and I know that with success comes the responsibility of helping those who need help.

My goal is to be able to attend the most academically selective school while being able to play at the highest level.

I am looking for a mid-sized school that offers business/finance courses as I plan to attend law school and earn my JD/MBA (jointly) after college. Although these are my current goals, I know that they may change over the next year or two.

Whatever the case may be, I look forward to my future.