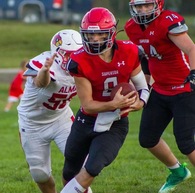 I’ve grown up in a military family, always looking up to my Dad and Uncle. My Dad was in the infantry, then went on to go to sniper school, fighting in Operation Desert Storm. My uncle was in the Airborne Division, jumping out of planes and being the first guy to the drop point. I’ve always been so interested in the military or even a government job. My main interest right now is to become an ATF agent.

I play high school sports, and in sports ,there has to be a leader. I’ve always been in the leadership role. I play quarterback in football, and the quarterback is known as the leader on the team. In the military, everyone has to be a leader, not just for themselves, but for the guys next to him. Leadership and self discipline are great skills to have in this line of work. Marine recruiters said being courageous and having that self discipline will get one far in life.

Watching movies such as Lone Survivor  has shown me that I’ve got whatever it takes to get that far. I feel when a person is very passionate about something, he will go and get it. I’m very passionate about the military, and I’m always thankful for the people who have served. It takes a great sacrifice to do something, such as fighting for your country. Everyone sees the big fight going on, but nobody sees what it takes to get there.

Showing heart and effort into something such as becoming a Navy Seal is crucial. I know that I will never quit: I’ve always shown heart in anything I do, even if I don’t like it.  Going into a government job would be the best thing for me. I never quit, I'll always keep going.

Growing up in a military family was huge for me. I saw what I want in my future such as a government job or even going into the military. I never quit at anything I do. I always put in the effort to do something.