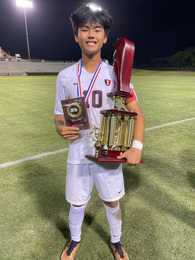 Thank you for the opportunity to share my college goals and aspirations, as well share why I would be a great teammate at any collegiate soccer program.  I am currently attending 'Iolani School in Honolulu, Hawai'i and I just finished my sophomore year.  'Iolani School (based on the 2021 Niche reviews) is ranked #1 in three categories in Hawaii: Best College Prep Private High Schools in Hawai'i, Best High Schools for STEM in Hawai'i, and Best Teachers in Hawai'i.

Next year, for my junior year, my goal is to enroll in Honors Pre-Calculus and AP US Government. I am also looking forward to continuing my studies in the Japanese language and will be taking Japanese 4.  I look forward to going to school each day and the challenges that await me. My goal is to enter the medical work field, and I know that 'Iolani School will provide the resources and create a seamless pathway towards my career.  I enjoy helping people and want to share my successes by giving back to all of the communities who have supported me.

Besides academics, 'Iolani School also boast one of the best athletic programs in the State that has a tradition for modesty, sportsmanship, and unity.  Its motto "One TEAM" is truly something I value and I work hard everyday to help others that surround me become better.  As a freshman, I played on the school's JV Soccer team as the starting mid fielder and was promoted to the Varsity team at the conclusion of the JV season.  I also had the privilege of traveling to England to play, train, and compete with the Varsity team.  I believe my hard work and exhibiting 'Iolani's tradition (modesty, sportsmanship, and unity) during the previous seasons had led to that special invite by the Varsity Soccer coaches to allow me to travel with the team in November 2019.

As the 2020-21 club soccer season comes to an end, I am excited for the rest of the summer.  This club season I made the bold move to the Honolulu Bulls Soccer Club to play with the 2004 boys team. Made up of the class of 2022 and 2023 players, this was my opportunity to compete and to rise to the challenge in a highly competitive environment where all players 2001-2004 (from rising high school sophomores to rising college freshmen) practice and compete together.  And for me, each week presented a challenge and a fresh start to earn a spot on the roster of the 2003, 2002, and the junior Bulls teams who compete in the Men's league.  This club season I played on the Junior Bulls team, in the Men's League, club passed to play with the 2002 boys, where I competed with fellow midfielders who are soon off to play at Division I and Division III schools across the nation.  It was a true privilege and honor to play alongside these guys who I learned a lot from.

I will be playing at the USYS Far West Regionals in Boise, ID, the USCS National Cup in Denver, CO, and the Surf Cup in San Diego, CA later this summer.  Soon after I will be attending the Exact Academic 50 ID Camp in Morgan Hill, CA from August 1-3, 2021, and then the Elite ID Camp in Glendale, CA on August 6, 2021.  I will also be back in my home state, on the island of Maui to compete and train at the Hawaii Football Showcase of Talents from July 9-11, 2021.

I'm looking forward to meeting everyone soon.  Take a look at my profile and videos, follow me as I take you on a journey.  Trust me, you won't want to miss it.  New videos to be added soon.