College Coach? Click here to view all of Rixi's information. 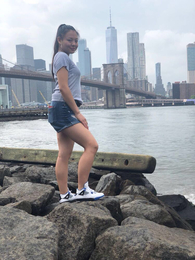 I am a currently three-sport student-athlete in Friends Seminary (Varsity Volleyball, Varsity Basketball, and Varsity Track). I was on junior varsity in freshman year, and I started every game. It was my first year playing the sport so I took my freshman season improving on the sport. In my sophomore year, I made it to Varsity, but I did not get a lot of playing time. At that time, I started to research travel/club volleyball teams for me to join, but it was already too late. I was devastated, but a few months later my friends told me there was a free league in the Bronx that allowed anyone to join. I decided to go because I needed to improve and I wanted to get playing time in all of the games. Upon entering my junior year, I tried out for two travel teams in NYC: Impact 17u and NYC Juniors BK 17u. I got onto both teams and was on Varsity Volleyball in school. I chose to play for NYC Juniors BK 17u because the location was a better fit for me.

My 2019 volleyball season has ended a few months ago and losing 6 seniors caused a major drop in skill within our team. In trying to help our team improve, I tried to talk to my teammates about joining outside teams and practicing at home. I was a starting libero and played in every game. Even though our team suffered many losses, but I never gave up on them or myself. I pushed my team and myself to try our best and we came close to winning in a few very hard games.

My 2019-20 club volleyball season has started not too long ago and it has been going well. We had our first tournament on January 5th and even though we only won 1 of the 5 games we played, we learned a lot and plan on improving a lot. I was starting libero for this tournament and had a lot of playing time. During these past two months on this team, I learned a lot about communication, teamwork, and being active. In the next few months, I will continue to learn more about volleyball and my team.

I only started to play volleyball in high school so I did not have much experience before my freshman year. Playing volleyball made me realize how important communication, teamwork, and trust was. I feel like playing volleyball really shaped me into a different person because I am very competitive and usually independent, but volleyball taught me to depend on others and to work with others on a bigger problem. The analogy goes, the problem is the court and the 6 people on the court cover each spot (part of the problem), and the ball landing on the other side is the goal (answer). Because I also play basketball, I feel like I have many different perspectives on team sports and how leadership should work on the team. In being on any team, I think the most important factor is to listen to others no matter what position/level/seniority you have in the team. I try to push as many people as I can to follow this because some people tend to hear the words, but not listen to the words of people younger than them or have less experience.

I plan to be a finance major because I am good at math and I have always excelled in it. Aside from volleyball, I also get really good grades and I plan to study very hard throughout the 4 years of college. I have played libero for all my years of volleyball because of my love for digging and getting the ball up from a dive, pancake, or roll. Even though I might not get a lot of recognition for good passes, I still love to do it because it's what I excel in and that's what matters to me.

Yes. I am in AP Statistics and AP Chemistry.