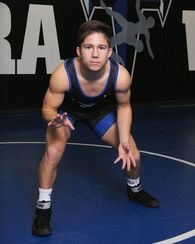 I have completed my junior year at Tuscarora High School in Leesburg, VA.  I am interested in attending a college that provides a well-rounded academic (Engineering) and athletic (Wrestling) program.  I have wrestled since I was 7 years old, achieving much success in my varsity career.  I am a 2-time District Champion, 1-time Region Champion, 2-time State Qualifier, and placed 5th in the State of Virginia.  There were two people who influenced my decision to begin wrestling.  The first was my grandfather, Robert L. DeProspero, retired Special Agent in Charge of the Presidential Protective Division for the United States Secret Service.  My grandfather was a wrestler for West Virginia University, wrestler and coach for the United States Air Force, varsity wrestling head coach for Madison High School in Vienna, VA, and 14 year coach to numerous boys (to include my uncle) in Northern Virginia in the Beltway League (now CAWL).  In October, 1992, my grandfather was elected into the West Virginia University's School of Physical Education Hall of Fame, and in October, 1995, he was inducted into WVU's Academy of Distinguished Alumni.  The second was my uncle, Robert N. DeProspero, who attended Robinson High School in Fairfax, VA.  My uncle was a 3 time District Champ, 2 time Regional Champ, 3 time VA State Champ, 5 time Eastern National Freestyle Champion, and AAU National Freestyle Champion, and received a full ride at the University of Oklahoma.  Through their guidance, mentoring, and coaching, I learned that wrestling provided me with the highest of character, discipline, commitment, and self-motivation.  I know that these traits have aided in my success in my wrestling career, and more importantly in my academic achievements thus far, and will assist me for the rest of my life.  Whatever challenge is put before me, whether it be academics, or athletics, I fully prepare, and execute to the best of my ability.