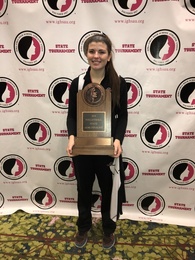 My competitiveness started at a very young age. Being the youngest of three, you know there had to be some competition in the family. Whether I was fighting to ride shotgun or be the first to find the remote, there was always something I had to compete for. That is where my love for sports came into play. No matter if I am on the court or on a field I always strive for a spot to play. I always wanted to do it all no matter how much time it took up. Softball pretty much fell into place. I mean who doesn’t like being able to smash a bat against a ball? My brother Skyler introduced me to basketball at a very young age. Considering that we had a basketball hoop in our driveway, you could bet we were out there all the time. But last and certainly not least, volleyball. My mom was the head varsity coach for Sergeant Bluff and because of that I was at practice every single day watching the girls compete for positions. Multiple people were striving to compete for my spot growing up, but being tall definitely had some benefits.

I am a 6'0 ft outside and right side hitter who's been best described as very competitive. My Varsity Volleyball Coach, Renee Winkel stated, "Kenzie has a high volleyball IQ and sees the court incredibly well. Her competitive nature combined with a solid work ethic ensures she gets better everyday and she leads by example. She takes an ample amount of time to get to know her teammates so she can bring out their best play on the court."

I have played on the Varsity Volleyball team since I was a freshmen. My freshmen season we went 29-15 and ending our season just short of the state tournament by losing in the Regional Final Match. When I was a sophomore my team broke our school record and went 42-4 and ended our season just short of a state title placing second in the Class 4A Title Game. My High School team this past season went 35-7, ending our season at the Iowa Class 4A State Tournament in the semifinals. We accomplished many things as a team including being ranked No.1 in class 4A in the state of Iowa.

Not only do I work hard in sports, but academics is high on the totem poll as well. I have a 3.7 Grade Point Average. I am still deciding for sure on my field of study, but I love math! I am driven both on the court and in the classroom. I LOVE the game of volleyball and the friendships I have made through this sport and that is why I want to continue to play competitively in college!