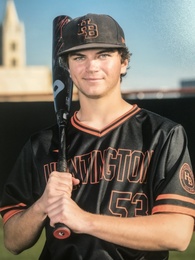 Baseball had always come very easy for me. Baseball is even “in my blood” as my Grandfather, Eddie Yost, was a starting third baseman and coached in the Major Leagues for 40 years and my brother, Eddie Yost, was a LHP at Pepperdine. But, that all changed when I made the team at Huntington Beach High School (HBHS), a Southern California, Division I, nationally competitive and recognized baseball program. Everyone in our program shared similar accolades. I no longer stood out nor could rest on my laurels. Everyone in our program was extremely talented and equally qualified. I had to quickly learn that my past will not count towards earning playing time, let alone a starting position. What was in my past had absolutely no bearing on my future.

At HBHS, I had to drastically change my mind set and focus and accept a new intensity of scrutiny, criticism and commitment in order to continue to improve and compete at this next level.

My first three years competing at HBHS were extremely physically and mentally challenging. But, I weathered the storm and my hard work paid off. As a freshman, I earned a starting infield position, and was ultimately voted "Team MVP" by my peers. The following season, I was one of three sophomores on the Varsity team and fought hard to earn a starting position at third base on a team that went on to clinch a spot in the highly competitive Southern Section, Division I, CIF playoffs for the fourth year in a row. This past season as a Junior, I started at 3B on a Varsity team that had eight Division I and four Division II commits and went on to place 3rd at the National High School Invitational, clinch the Sunset League championship and compete through the semis of the CIF championships.

Although never easy, I realize that this entire experience has only made me a better competitor, athlete, ball player, but more importantly, a better person. Understanding the new challenges of playing for a program of this caliber, I'm a mentor for the younger ball players. I have an immense respect for my coaches and fellow team mates, particularly those team mates who have strived for and are now committed to playing at the next level. I’m a very positive, supportive, team player, while at the same time, I continue to compete neck-and-neck with my fellow team mates for playing time and a starting position.

I will continue to appreciate and build on my past, which has made me well-prepared, both mentally and physically, to battle challenges that I will face, both as a person and student athlete, in the future. My primary goal is to remain committed to these ongoing challenges for not only myself, but also my team, in both high school and at the next level. My hope is that baseball will never come easy for me again.