College Coach? Click here to view all of Logan's information. 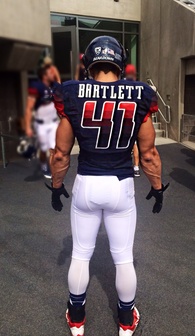 San Juan Capistrano (Calif.) JSerra Catholic cornerback Logan Bartlett has eagerly been anticipating his senior football season and is ready to showcase some of his talents.

"I think some of my biggest strengths are my speed and agility, and looking for the ball," he said.

Bartlett, who also plays wide receiver for the Lions, has been busy training in the off-season in preparation for spring football.

"I've been working on improving my speed even more, and working on technicalities, like footwork and hand speed. We just started spring football. I know that there will be some coaches coming out, like Arizona, San Diego State, and possibly Columbia," he said.

The 5'11", 175 lb. prospect, who is working to put on five to ten pounds before season, has been receiving interest from a few programs.

"I've talked with Columbia and San Diego State, and they are both schools I'm interested in. Columbia, obviously, is a great academic school and I would love to go there because it's Ivy League; the chance to play football there would be awesome. I love the college environment of San Diego State, and everywhere around it is awesome; the weather is great," he said.

Bartlett is keeping all of his options open and is exploring all schools, including taking a few visits.

"I'm planning on taking a visit to Arizona's campus, and I'll probably also take one to SDSU," he said.

As an avid football player for the past 7 years, it has been a dream of mine to play collegiate football.  My passion for the sport began at the age of ten and has continued through my high school career.  Following one year of freshman football, I began to play varsity football at JSerra Catholic High School. Football has been an important factor in my personal development. By playing Corner and Receiver at a varsity level, I understand the importance of commitment, agility, and teamwork.  I posses the physical strength and speed to be a competive player. I have maintained strong dedication to the sport by participating in multiple ESPN Nike Football Rise camps and National Underclassmen Combines.  I always seek to improve myself as a player. I have sought camps and off season training as an opportunity to assess my strengths and areas of improvement.  I am confident that I have the talent, drive, and motivation to succeed as a college level football player.

In addition to my devotion to football, I also have a strong academic interest in biology. I hope to incorporate my curiosity in science with my passion for football by studying kinesiology and sports medicine as an undergraduate. I ultimately intend to extend my goal of playing college football by serving as a positive role model to others and by giving back to the community.