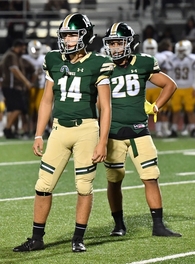 My goals for college other than football are still up in the air.   Perhaps I will go into communications and follow my dads footsteps in advertising.  Maybe it will be in the sciences.  It's too early to know for sure which direction I will choose.   I am keeping my choices open for now.

My dad went to USC and of course I grew up watching all the games.  I was brought home from the hospital in a USC jersey.   I would love to go to USC and have the experience he grew up with but as I learn more about college and playing football, I want to go somewhere that I can play, where I can contribute and equally important, where I can learn and get a degree.  If thats USC, that would be great. If its somewhere else...that would be fantastic too.

My parents say that my love of the game spills out to those around me and that my dedication is infectious to those who feel the same way about football.  I believe in honesty, loyalty and putting maximum effort in at all times to fine tune not only my craft but also those around me.  Pushing them to be better today so they perform better tomorrow.   My commitment to continuous improvement is unwavering.   And when that doesn't get a team excited, I am genuinely a happy even keeled guy...and when I get on the field for practice or a game....its just going to be magical for all my team mates, you have to have fun doing what you love.

Dedication and commitment are often just words but I grew up wanting to be a Quarterback and began training very early with various coaches including Chris Rix of ESPN and Champion Training Academy fame.    One thing I know for sure is great coaches are the reason I love football and I have had some excellent coaches so far.

I had played many sports: baseball, basketball and soccer.  Still have an amazing curve ball.  But I love football.

My dad recognized several years ago that I had what he called "lead feet".   For the past several years I have been running hills and training with a running coach John LeJay three days a week.   I went from one of the slowest to one of the fastest so its been and continues to do wonders.  Hill training is 11 months starting in January and concluding in November.   I take the end of the year off to have fun watching bowl games and things when the hills are full of mud.

During off season I try to spend  hours on throwing mechanics, fundamentals of footwork, arm movement and agility with Coach Stremick and Coach Rix.  What I learn from them is put into practice all week before and during the season.

This sounds like a lot of work but I love it.

With all this work you would think I don't have time for other things but of course I do.  I fly and compete with RC planes.  My favorite is still the P51 Mustang.  I get to the air soft park and have a blast competing in squad raids.   I mountain bike  and do all the things a normal high school kid does, even play video games.   But given the choice...I will be on a field with a football.