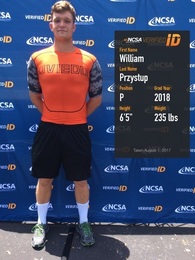 MY intention is to earn a degree in Engineering and play football (punt or kick) at the college level. I have a strong work ethic at home, in the class room, weight room, on and off the field. It was this spring that my head football coach noticed my work ethic and made me a team captain. During the summer of 2017 I attend numerous kicking camps and one National Kicking event. I was proud of my performances, catching the attention of many Division 1 coaches leading to some meetings and discussions with them after their camps. I had very solid performances at the University of Florida, Florida State, Vanderbilt, Air Force Academy, University of Colorado, University of Alabama Birmingham, I also caught the coaches eye at University of Central Florida and Michigan State.  At the Kornblue National and Kicking Challenge I was the only 2018 kicker to place in the top three at camp in both punting and kicking (Field Goals and Kick Off’s). I am blessed to have receive the offers I have and look forward to getting on the football field for my senior year. Awarded All State Punter for 2017 Div 8a

During the 2016 season I attended three summer kicking camps. University of Florida, University of Auburn and University of Central Florida. Having extremely strong performances at all 3 events. During the Florida camp I shared 1st place honors in the mornings punting competition. Then winning the field goal competition. Going 6 for 6, hitting a 50 then 55 yarder to win it. At Auburn, I again performed well, recording extremely good consistent numbers throughout the day. I was honored when asked to stay after camp to talk with the coaching staff. Camp coaching staff reiterating my strong performance of the day’s events and was on their radar. University of Central Florida another good strong performance. Winning both punting events of the day.

I do not constantly attend many ranking organizations throughout the year,  I try to attended at least one of their events. I have and placed in 3 of the nationally known kicking camps/charting organizations in the country. I have been ranked a 5 star punter and a 4.5 kicker.  I have also held the title of most powerful leg and held the number 4 spot in the country in punting.

Upon completion of my three camps an as a junior, I was invited and participated In Kornblue's Collegiate Elite Invite, Charting, I presently hold the #3 spot  in the in the country with Kornblue Fab 50 standing for punting in my graduatig class of 2018 and 17th over all (   http://www.kornbluekicking.com/?page_id=1069   ) Earning a 4.5 Star ranting.  I also hold the #6 spot in the country for punting, #7 spot for Most Powerful Leg and #8 for punter/Kicker combo at Prokicker.com  (https://www.prokicker.com/rankings/junior/punters  )  for my graduating class of 2018.  2016 & 2017 Ray Guy Prokicker.com Top Prospect Award.  Recently earned a 5 star ranting with KOHL's Kicking

Presently I am working with a sports body trainer and a kicking coach.  I am a left footed 6'4"   242 lb  kicker with great hands.  After being brought up to varsity during the 2015 season as the punter. I went on to earn Special Teams Player of the game honors twice.  During this same season I was named to the 1st Team All Conference.  Only Sophomore in the SAC to make 1st team 9A. For 2016 I was awarded  All Conference Punter.  As far as Athletics go. During my 8th grade season and as a starter, I contributed to my schools soccer program bringing home their first state title. During this same year as the starting center on the basketball team.  I assisted my team in taking 2nd at State and placed 9th in the county at nationals. As a freshman I was the only 9th grader to make the JV basketball team, and upon completion of the JV season was moved up to varsity in which we place 4th at State. As a sophomore and now junior at Oviedo High School I earned a spot on the varsity basketball team in Div. 9A.

As far as my character. I have recently earned the Eagle Scout rank ,  this while being a 2 sport varsity letter winner and holding a 3.58 GPA while taking Honor's and AP classes.  ACT test score is 25.   I am a 5 star rated Punter with KOHLS Kicking, 4.5 Star for Kicking, 4. 5 Star Punter with Kornblue Kicking