College Coach? Click here to view all of Clayton's information. 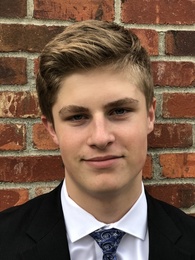 I love the game of football. I have played football since 4th grade and have been starting quarterback since 6th grade. During 6th and 7th grade, I was coached by a former NFL player who saw my potential as a quarterback. We had two very successful seasons; I was able to routinely throw beyond coverage which led to a number of victories and as well as opposing coaches breaking their clipboards over their knees. At an early age, I learned that a successful quarterback had to be a strong leader who is composed and focused, who is a good communicator and above all, maintains a strong level of confidence to win. Through competition, you see the winners and the losers. We had many victories but when we lost, I learned even more. If you lose, a strong leader responds to adversity by leading his teammates into the next game with confidence and grit.

My Sophomore year at Mercer Island High School was fantastic and very busy as I played both C-Team (JV equivalent) and Varsity. I threw for 12 touchdowns and our team had one of the best records in the school’s history. Leading this team was a great experience, always being positive and listening to my coaches on how to improve and create a competitive advantage. I was proud of the fact that I could quickly read coverages and check off each route before throwing.

Playing in numerous Varsity games in 2017 was an incredible experience. The game was faster but so was I as you can see from a number of clips on my highlight reel. Mercer Island went to the state playoffs, only to lose to the team which took the state 3A title. While playing in both C Team and Varsity games during the season, I still maintained my 3.8 grade point average while carrying a heavier academic load with two honors courses and doubling up on science courses.

As a Junior, I will be the starting quarterback for Mercer Island High School. During the last five years, I have worked extremely hard to achieve this goal and have consistently worked harder than my competitors during the off-season. Currently, I am maintaining a rigorous training schedule by running, lifting, training with my speed and agility track coach, training with my quarterback coach and throwing and practicing routes with my teammates on a weekly basis.  I am embracing this opportunity. Through HARD work, drive, determination, commitment and confidence, I am looking forward to a very successful 2018 football season. Go Mercer Island!