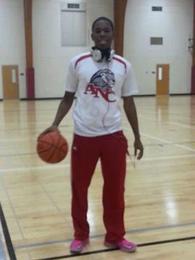 I'm Darryl Bryant a 6'2 1/2 Guard.  I have played the 1, 2,and 3 guard. I was invited  to 4 College Prospect Camps this summer.  Unfortunately I sprained my ankle at Hoop Group in July 2013. During the week of Hoop Group I was recognized as one of the Day Two Top Performers. https://hoopgroup.com/elite-camp-updates/elite-team-camp-day-two-top-performers/ . After Hoop Group I had to do 8 weeks of Physical Therapy and now I do Rehab 4 days a week. My senior season has started and I started off slowly. My first Game was December 4 against St. Benedicts Prep only scoring 5 points and 2 rebounds and 2 assist. I can admit that this was the first real game I played since my injury and I was off. My second game was against Perkiomen High School I scored 15 points 3 assist and 3 rebounds. My third game in three consecutive days was against Life Center High School at the Coatesville Scholastic Play-By-Play Tip-Off Classic.  I scored 23 points and won the MVP of my Team. In an article done by City Of Basketball Love there were some positive statements made about my game. This let me know that my hard work and determination is paying off. See below.
http://cityofbasketballlove.com/2013/12/life-center-st-benedicts-pick-up-wins-at-coatesville-spbp-classic/. I

I tell you what, after coming off of two back-to-back games and playing a team like Life Center, I think our guys did well,” ANC coach Kevin Givens told CoBL. “I just think we didn’t have any legs tonight defensively and we couldn’t hit shots…the guys gave it their all and gave it a hard effort, we played three back-to-back tough games.

“I think the future’s bright for us, I think we’re going to be alright.”
Givens’ Lions (1-2) are certainly young, with only one senior, Darryl Bryant, on the roster. Bryant led all scorers with 23 points, scoring nine in the first quarter and then 13 in the fourth, showing off a very confident stroke from downtown. Harley, a transfer from Imhotep, added 12 points, while Tory Whiting added seven.

Senior Captain Darryl Bryant scored 23 points and went 4 for 4 from the line at the end of the game to seal the victory over Summit Country.

Size, depth has ANC with eyes on FSL title

Senior guard Darryl Bryant returns to the Lions after leading the team in scoring. Bryant netted 13.8 points per league game last year. Fellow senior guard Payton Johnson joins Bryant as the only two seniors on this year’s roster. The two seniors will obviously be looked upon to lead. “I’m just looking for simple leadership,” Givens said. “I’m not looking for it in terms of verbal leadership. Neither one is very verbal, but I want them demonstrating on the court. I want them diving for balls, playing defense, being aggressive on the boards. If we get that from them, I think we’ll have some success.” Bryant and Johnson will look to take ANC back to its first Friends Schools League championship since the 2008-2009 season. The Lions have been in the league playoffs every year since that last title, losing in the final game twice. “We just have to fill the role and set the tone for the team,” Bryant said. “We’re trying some new things defensively, so just making sure all the guys are on the same page.”

Givens’ Lions (1-2) are certainly young, with only one senior, Darryl Bryant, on the roster. Bryant led all scorers with 23 points, scoring nine in the first quarter and then 13 in the fourth, showing off a very confident stroke from downtown. Harley, a transfer from Imhotep, added 12 points, while Tory Whiting added seven.

The Lions were led down the stretch by Darryl Bryant and Vince Jackson. Bryant scored three straight buckets for ANC to give them the late lead and Jackson sunk two free-throws to extend the lead. Bryant and Jackson had 14 and 10 points respectively. For a team with only two seniors on the squad it is especially important for the veterans to take a leadership role. Bryant and Payton Johnson both assume leadership roles for the Lions. “Coach is hard on us about leading [the team],” Bryant said. “We have to make sure we lead by example and do everything right and there’s no complaining because the young guys do everything that we do.” The senior takes that responsibility very seriously. Bryant relied upon his leadership abilities along with his talent to try and will the team to victory. “I put a lot of pressure on myself to deliver for my team. I did it today and I’m grateful for that. My team believes in me and I believe in my team,” Bryant said.

Before the game even started, Abington Friends coach Steve Chadwin knew his team had its hands full. He was well aware of Academy New Church's talent as a team, and realized that it would be one of the toughest tests of the season for the ' Roos. What Chadwin may have not known, however, was that it would be one guy who was going to take over the game from the very first minute.

ANC senior guard Darryl Bryant put up 13 points all by himself in the first quarter, helping the Lions to a 13-point lead after only eight minutes. In the first half, ANC (14-7, 6-1) shot 20-for-32 from the field as a team, as well as 6-for-9 from three-point range. And in the second half, Bryant opened things up with another trey to put the Lions up by 33 points."We made a big fuss about coming out and playing hard,' Bryant said. "We practiced hard, we had a game plan and we played that and shot a high percentage. I felt like everything was falling for me and it was a good day.' The remainder of the game would continue to be one-sided, as ANC went on to a 89-56 win over the ' Roos in a Friends Schools League meeting at Abington Friends School on Tuesday evening. Bryant finished with 25 points, while leading an ANC attack which finished with an incredible 50 points in the first half alone. Bryant, who shot 11-for-13 from the floor - 3-for-3 from the outside - also pulled down a pair of rebounds and dished out an assist to add to his huge game."Darryl is one of the guys we're happy about,' Givens said. "He's hitting his jump shot. If he's knocking that down, we can win a lot of basketball games.'

2013 Senior Season
Team Captain
All League First Team
Team MVP for the 2013 Season
MVP Jameer Nelson Classic Game
Elected 9 Player of the Game Awards
Points Per Game   14.4
Points   345
GPA 84
SAT 930
Coach, I know that I will be an asset to your team on and off the court. My GPA is 84 at one of the top academic performing boarding schools. I'm accustomed to working on my own academically and asking for help when I'm struggling. I'm working hard to achieve my goals despite my set back this summer. I have dreamed about playing college basketball and I know I can play on that level. I have a strong family support system and I know with more hard work I will reach my goals to continue to be a student athlete. Please come out to see me play.   My contact phone # is 646-639-6807. Thanking you in advance.