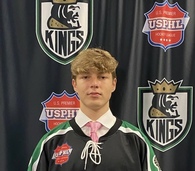 Growing up in Massachusetts was perfect for ice hockey--I had the support of family, friends, and coaches, and most importantly, access to ice. I thrived on the competition of ice hockey and was accepted to a travel ice hockey program when I was eight. Unfortunately, before the season began, my family and I moved south to Savannah, GA. Transitioning to Savannah was hard because there wasn't as much opportunity to play hockey. However, I didn’t let the lack of ice stop me and I discovered roller hockey.  After four years of roller hockey, I returned to the ice as a second-year Peewee with the Charleston Youth Hockey Association, thrilled at my opportunity to play ice hockey.

After a year in Charleston, I played ice hockey in South Carolina for the Carolina Rage Travel Hockey Program for two years in an A/AA competition level until I was a second-year midget. The next season, I was invited to a summer "try-out" with the U16 AAA Ohio Blue Jackets. I was selected for the team for the 2019-2020 season, but it came with a cost. Being located in Columbus, Ohio, and my family living in Savannah, Georgia, I had to make the decision of how important ice hockey was to me. I made the decision without hesitation and lived with a host family for the season, switching schools and environments to continue my dream.

Throughout this journey, I’ve learned that it was going to take a lot more than just skill (dedication, hard work, commitment, and a good attitude) to achieve what I wanted. Not only was I progressing through the years with hockey, I was a multi-sport athlete (cross country, soccer, ice, and roller hockey); I was also learning to play the violin and keeping up with my academics (GPA UW: 3.573/GPA W: 3.719). I am currently a third-year midget playing my first year of U18 with the South Shore Kings AAA program located in Boston, Massachusetts. I will be living with another host family and doing online school for my senior year (2020-2021) through Laurel-Springs School. It is through these experiences both on and off the ice that has given me the confidence to achieve my goal to play at the collegiate level.