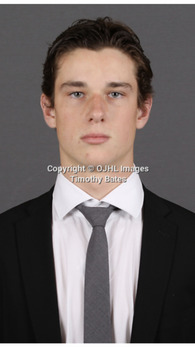 Playing with the North York Rangers for a second season, my goal is to attract a D1 hockey team with a strong culture. This summer I plan to complete the SAT’s and train hard continuing to develop, learn and grow focussing on the development process, reading pucks through traffic, playing the puck, controlling rebounds, footwork, my mental game, and many other tools that will help me achieve my goal and earn ice time.

In my rookie season with North York (OJHL) I went 8-12-3 in the regular season with a 3.65 GAA and a 0.897 SVP, along with 3 shutouts. I was limited in my games played due to concussion and a hip injury which kept me out a total of six weeks.  It was a year of dealing with adversity, maturing, exercising composure, and coming out stronger than before. The strong culture and family nature in North York was a great place for me to learn the ways of junior hockey. Going into playoffs I ended the regular season on a 5 game winning streak, I kept that pace going into playoffs against the number 1 seeded Jr. Canadiens. We completed the upset in 5 games, in my 3 games I went 3-0 with a 2.13 GAA and a 0.938 SVP.

Having had an exceptional Midget year (2018/2019) playing with the GTHL Toronto Young Nationals winning the Telus Cup(MVP), OHF’s (MVP), Scotiabank GTHL Playoffs, GTHL Midget AAA All Star game selection and winning the Sudbury Nickel Tournament (MVP), I was honoured to have been drafted 1st round, 2nd overall in the U18 Priority Selection Draft and offered a position with the Flint Firebirds as well as having my helmet and picture holding the Telus Cup as part of the North American Championship exhibit in the Hockey Hall of Fame (Toronto). In Minor Midget I played with the Toronto Young Nationals and was selected to play in the OHL Gold Cup.

Graduating from SMCS in 2019 , an accelerated honours student (St Thomas More Society Award) with a 3.92 GPA I played Junior Hockey, Junior Lacrosse and Varsity Lacrosse. Outside of school I played Elite Club Level lacrosse (long pole) for one of Canada’s top programs, EDGE and I continue to work as a goalie instructor with Piero Greco (NY Islanders) and Kain Tisi (Kitchener Rangers). I also run a summer lacrosse program for inner city kids in Regent Park.

My natural strengths include working on teams or tasks where workable and quality driven results are required. Dedication and commitment to my family, to my academics, to my sports teams and to giving back to those less fortunate validate my strong morals and unrelenting work ethic to accomplish goals both on and off the ice.