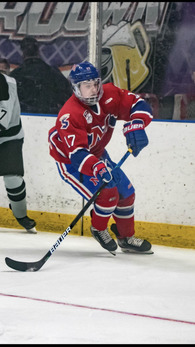 Sacrifices come in all shapes and sizes and what might be a sacrifice for one individual might be considered trivial for another.  Yet, no matter the type of sacrifice made, often times it leads to favorable outcomes. I have been lucky that the types of sacrifices I have had to make, have had positive results.

In order to play hockey at an elite level, I have surrounded myself with sacrifice. I say surrounded because it has not just been me who has sacrificed, but rather both my parents and my younger sister, Alexa.  Elite hockey takes an immense amount of time.  As a result of this, I had to sacrifice my love for the sport of soccer so that I could focus every minute of my time to hockey.  There was just not enough time in the day to train hard for hockey and soccer.  Hockey won out, and I had to say goodbye to another sport that I enjoyed and excelled in.  Likewise, I had to take time away from friends and socialization, two parts of my life I very much enjoy, so that I could train more intensely, do more traveling for hockey, and spend more time on the ice.  I further faced sacrifice with my body.  Sometimes I played through pain after a tough check.  Hockey is so important to me that I was willing to put these parts of my life aside, so that hockey could be in charge.  Yet, I was not alone with what has been given up for hockey.  My parents have sacrificed financially so that I could play.  It meant we didn’t go on our dream vacation, some of those pesky house repairs would have to wait, and the little extras my family once enjoyed like spending time at a restaurant for a family dinner have gone by the wayside. Further, they have given up hours and hours of their time getting me to games, cheering me on, and being my support system.  Even my little sister has had to sacrifice for my love of hockey.  When Alexa was too little to stay alone, my parents brought her to the rink so that we could be together as a family.  Indeed, my family and I have given a lot up for hockey.  So, the obvious questions might be, “has the sacrifice been worth it”  “have you met your goal?”  Neither of those questions is answerable right now because developing my hockey skills is a journey and there is no end product until I reach the goals I have set for myself.  However, something interesting has happened along the way as we made these sacrifices.  I developed grit.

Grit means sticking with something even when it was hard.  Physically, there are days I feel banged up after having played multiple tough games in a row.  I’d love to curl up on the couch, play some video games and just relax, but something inside me tells me to keep on going.  Grit isn’t just physical, it’s emotional too.  All of the sacrifices I have made, stay in my brain, and when I feel bad that I am missing time with my friends or a school social event because of hockey, I remind myself that hockey at this level takes commitment, and having this understanding leads me to keep going.  Plus, since hockey takes up so much of my life, sometimes academics have had to be done on long car rides or planes because I had to keep my priorities.  Keeping myself on the Honor Roll  is as important as hockey.  My current GPA is 3.9/4.0 because I realize that a solid hockey player is grounded academically.  These sacrifices have made me more organized and helped me to prioritize what is most important.  Lastly, grit to me is having a stick-with-it attitude.  Even when I am exhausted from shooting pucks, I push myself to shoot another.  My journey through the world of hockey will not advance if I am complacent and willing to settle. I learned a valuable lesson during our time quarantined at home.  I wanted to do some training, but we did not have a lot to work with.  Plus, money was tight, and I knew that we could not spend a lot on anything that wasn’t absolutely necessary. I asked my dad to build me a large box, so I could practice my box jumping. It wasn’t an ideal situation, but it helped tremendously with my endurance and agility.  Sometimes, to meet my goals, I have had to push hard in creative ways I hadn’t ever expected myself to.  Life’s sacrifices have rewarded me with grit.