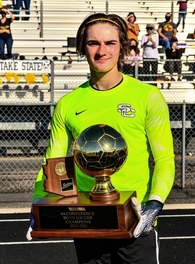 I've always been drawn to the position of Goalkeeper.  I feel it is the most technically, tactically and psychologically difficult position in the game, and I enjoy the fact that playing the position well requires me to perform at my best with body, mind and spirit.  I know that I have the heart, mental and physical toughness, resiliency, and leadership skills to be a Keeper at the highest echelons of the college game, and that is what I aspire to do.  I feel that I have demonstrated the ability to remain calm under pressure, and to be a positive leader on any team.  Of course, I'm an effective leader when things are going well, but more importantly, I know how to reassure my teammates with the proper presence and attitude when things are not going as well as they should.

I truly enjoy the process of mastering the technical and tactical fundamentals, and staying sharp on these via repetition under difficult training and match conditions.  I've actively sought-out, and have been selected for, pressurized, high-level playing experiences to push my skills and maturity.  For example, for the past two years, I have played as the Arizona ODP U14 and U15 #1 goalkeeper.  This year, our team won the ODP West Region Championships; my team and I allowed only two goals the entire tournament, including maintaining a clean sheet in the Final against Oregon.  For the past two years, I have also been selected for and attended the ODP West Region ID Camp with the top 2004 ODP players from 13 Western states.  Additionally, in the Fall of 2016, I was scouted by the La Liga MX top team Rayados de Monterrey, and trained with their Academy (Fuerzas Basicas) in Monterrey, Mexico, for a week.  I've played internationally in Mexico, participating in two Copa Rayados tournaments in Monterrey, where I played a "year up" against some of the best 2003 year-group talent in Mexico.  Finally, as a Freshman Goalkeeper on the Salpointe Catholic High School Varsity team in Tucson, Arizona, I'm continuing to push my development by playing against older, more physically-developed players.

Ultimately, I know that the discipline, skills and traits that have enabled me to become a successful goalkeeper will also permit me to be successful in the demanding college athletics and classroom environments, and beyond.  As a result, I'm looking forward to finding the right program and school where I can contribute immediately, and where I can continue to develop as a player, student, and person.  Thank you for taking the time to view my profile, and for considering me as a potential future leader on your team.