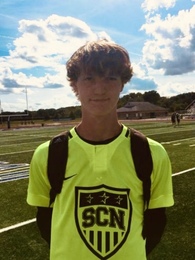 My name is Bobby Curran.  I am a 6’7” goalkeeper and I made my St. Charles North High School Varsity team as a freshman.  My team won our Illinois State Sectional this year and lost the regional final by one goal to the team that went on to win the Illinois State Championship.  I was selected to the All-Area team this year.  I had a .775 goals against average and 7 shutouts.  During my sophomore year we placed 4th  (2017) in the Illinois State High School Association State Tournament in the top Class 3A division.  I am a Senior (Class of 2020) and was the returning starting keeper.  My Varsity team also won the Pepsico Challenge Tournament in 2017,  and we finished second in 2016.

This spring I will be playing club soccer with Sockers FC after playing the last 4-years with  Campton United .  Unfortunately this year Campton was not able to recruit enough players to form a 2001 team and I had to change clubs.  In 2018 we won the NISL Premier Division and were invited to Nationals.  My club head coach was Attila Schmidt (current Head Coach at Benedictine University), and my Goalkeeper Coach was Anthony Szymel (former Keeper Coach at DePaul University).

For the last two years, I also was the starting keeper on the 2001 Illinois ODP State team (my coach was Zac Brown, Goalkeeper Coach at Indiana University).  For the last 8-years, I have been a member of the PAWS Goalkeeper Academy (Coach Doug Cardosi) as well as BIG CAT Goalkeeping Academy (Coach Neil Thompson, current keeper coach at LA Galaxy).  I have attended Camp Shutout (the largest summer keeper camp in the USA) in Stevens Point, WI for 2 of the last 4-years (run by Coach Stan Anderson, Goalkeeper Coach at University of [email protected] Chicago).

I have attended Big Cat Goalkeeping Camp React the last 7-years and trained the last 2-summers with the professional keeper coaches of Sporting Lisbon of Portugal.  I mention this because I have been training constantly with some of the top Goalkeeper Coaches in the Midwest for the last 8-years.

This past August I attended the Exact 50 Academic College ID Camp with over 150 high school players and more than 30 goalkeepers from around the Midwest and was given the Golden Gloves Award as the best Goalkeeper at the camp.

In 2014, I was selected to play on a Midwest Allstar team assembled by Coerver Soccer to play in England, Wales and Scottland, I was the team’s starting keeper (Coach Tim Dean, Lake Forest College).

I also played high school basketball, but soccer is now my main focus.  I am very fast, athletic, coordinated with quick reflexes and I have developed strong technical keeper skills.  My father is 6’8” and I am projected to be 6’8” to 6’9” when fully grown, I am still growing!  I am very outgoing, clean-cut, well mannered and I never get in any trouble.  I am an excellent teammate, a good leader and I work and train harder than any goalkeepers I know.  My goal is to become a top collegiate goalkeeper and to help my team compete for conference and NCAA Championships.  I believe because of my 6’7” frame, exceptional quickness, athleticism, training and work ethic, I have more upside potential to become an excellent college level goalkeeper than most any other players from the Class of 2020.