College Coach? Click here to view all of Liam's information. 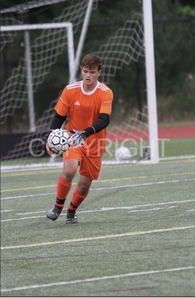 I am a 5'11", 190lb senior goalkeeper and Captain for the Tewksbury Memorial High School Varsity Soccer Team located in Tewksbury, Massachusetts. I have a 3.8 GPA (out of 4.5), am very proficient in the academic environment, and prefer mathematics and science courses.  I am looking for a college that can provide an even distribution in the classroom and on the field. I prefer a small to medium size school in a suburban setting with my college aspirations leaning towards a degree in either Business or Engineering.

My junior year was my first full season as the starting (and only) goalkeeper for the Varsity team.  Aside from missing a couple of games due to an injury, I started 17 of 19 games that season recording 6 shutouts.  We finished the season with a 9-6-4 record and qualified for the Division 2 North State Tournament.  This year saw a remarkable turnaround having finished with a dismal 3-15-1 record in 2017.

In all my years, I have only ever been a goalkeeper from the youth programs to the high school and club levels.  I am a strong, aggressive and communicative goalkeeper keeping my team properly placed to excel on the field.  I pride myself on making impossible saves and look for adding to my overall shutouts.  The Tewksbury High School Boys Varsity coach recently made the following comments in the Tewksbury Town Crier (September 2019):  "We head into most games and I know that and the team knows that our goalie is better than the opposing team's goalie, and when you know that beforehand, it's just a huge boost. He's going to be tough to replace (after he graduates). We're hoping he's going to have a great senior season. In my opinion, he's the best goalie in the league. The Dracut goalie is pretty good, too, but in my opinion, Liam is the best goalie in the entire conference."

Outside of high school, I am also a goalkeeper on the Seacoast United Benfica team.  I have played for the team since 2018 and will be playing again in 2019-2020.  This club level experience allows me to continue playing soccer and improving year round.