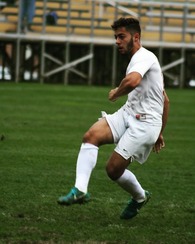 I have played on the freshman soccer team my freshman year, later on I got pulled up to JV at the end of the season. My sophomore year I had played JV the whole season. My junior year I was cut at tryouts, not making varsity or JV because I wasn't skilled enough to play soccer. These are the same coaches I have had all the other years too. I set a goal to be a varsity starter and even beyond that, for the next year. I had even told the coaches that and all my friends and family. They all said it was impossible, it is way too hard, you are out of your mind, you are dreaming to much, etc. I worked my ass every single day after that, in every weather. Sun, rain, storm, snow, blistering cold, and hot temperatures. This year I went to tryouts and they selected me to be on the varsity team and eventually in the season I was a starter. The coaches all said that they were all in awe when they saw who I became and that what I did was almost impossible (for them). This is just to show how I am the hardest, most determined, most consistent worker out in the world. I wouldn't say this if I couldn't prove it. Everything is possible to me because I do everything I have to, to achieve my ambitions and intuitions.

To Whom It May Concern,

It is my pleasure to recommend Jonathan, who I coached in the Westborough Boys Soccer Program. Jonathan has demonstrated remarkable resiliency, determination and patience throughout his high school career. He worked extremely hard while trying to improve himself to become the best player and teammate he could be.

Jonathan has a passion for the sport of soccer. He very much respects the culture the sport. Jonathan has played soccer since he was a young boy. He understands the sport is played best when players are creative. It is this creative spirit that Jonathan relishes. This has taught him to be patient with his own learning style and trustworthy to himself and his teammates.

Jonathan’s determination paid off as he made the team in his senior. However if he was to play he would have to learn a new position, fullback. Jonathan accepted the challenge. Jonathan worked very hard at practice, asking many questions about his new position trying to gather as much information as he could so he could perform well on the field. Many times Jonathan would stay an hour after practice to work on his skills and tactics. He never complained and as fate would have it his resilience and determination paid off. He earned several starts and played remarkably well against some of the strongest division one competition in the state.

Jonathan has climbed a mountain that most student athletes would have never have attempted to climb. He has not only earned the respect of his teammates but his head coach as well.

Jonathan has demonstrated patience, resilience and determination throughout his High School career. I would highly recommend Jonathan as he would be a fine addition to any institution. Please feel free to contact me if you have any further questions.