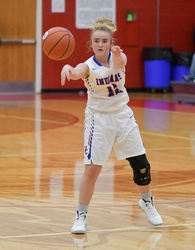 Since I was a young girl and a state finalist for the Indiana Elks Hoop Shoot, I've always had a strong desire to play basketball. I discovered my passion for basketball because of my experience at the Elks Hoop Shoot State Championship when I was in third grade. I was in the 8-9-year-old division, and I'd advanced to the State Finals by winning my local and district competitions. This experience taught me a lot, and I had opportunities to be invited for a special tour of the Indiana Basketball Hall of Fame, ride a chartered bus to all events, and be introduced at halftime of the Pacers game. Because of my hard work, I won the Bronze Medal in my age division, and I found my love of the game. I've spend countless hours in the gym, at home, and with coaches who have guided me with their knowledge and expertise to help me develop my basketball skills.  I feel that I'm a good candidate for a college team because I'm hard-working, responsible, a team player, and dedicated to giving all I have to the game and to my teammates.  I want to not only be the best basketball player I can be, but I also want to help my teammates excel in their own game.

I feel that I'm different from other recruits because I'm learning about what it takes to play at the next level, and I'm not relying on my AAU or high school coach to be the only people to help me achieve my goals.  I have high moral standards for myself, and I've learned to be strong in my faith to see me through the hard times, such as the death of my AAU coach, Coach Ron White, and the death of my softball coach, Ray Lutz, in June 2019.  Both of them taught me to believe in myself and help others on and off the court and field.  I'm playing my games with them in my heart and mind.

I am a three-sport athlete with the following achievements:

I currently play for Always 100 Edmonds, and I'm a member of the girls' basketball team at Union City Junior-Senior High School, Union City, IN.  where I've been a three-year starter.  I was fortunate to be the only freshman on our Varsity team, and I had the honor and thrill of playing in the IHSAA State Finals in Class 1A at Bankers Life Fieldhouse in Indianapolis in 2017.  That's an experience I'll treasure for the rest of my life.  I've was named All-County and All-Sectional during my junior year.

My current grade point average at the start of my senior year is a 3.7 GPA.  I work hard in school to maintain good grades, and I had straight A's for both nine-weeks of my freshman year.  This was my first year of having finals, and I dedicated time between my basketball practice to prepare for them.  I was named to the Randolph County Youth Salute for my senior year, and I'm currently the President of the Senior Class at Union City Junior-Senior HS.  I believe that this shows my dedication to my school and the leadership qualities I've gained from being an active student-athlete.