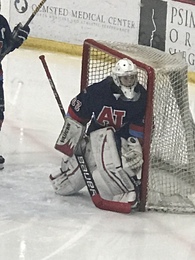 Hi, my name is Rachel Doppelhammer and I am a sophomore at Albert Lea High School. I am a three-sport athlete. I play hockey, tennis, and golf. I started playing hockey at the age of seven after deciding figure skating wasn’t for me. From the very first time I stepped on the ice as a hockey player, I knew that hockey was the sport for me. However, I never thought I would be a goalie. I played on a team without a goalie, so we would take turns. Playing goalie for the first time was such a great experience that I decided that’s the position I wanted to play. Throughout my hockey career, I have had to overcome adversity and politics. My second year of U10, I didn’t make the best team for my age-group but this experience taught me to never stop working hard. I would typically face anywhere from 50 to 120 shots per game that year. This gave me a ton of experience and taught me about resilience and mental toughness. I worked my hardest at every practice and game to better myself. I even practiced with my brother's U14 team every night after my practices. My first year of U12, we won three games including my first shutout where I faced 29 shots and earned player of the game. I continued to practice with my brother’s U16 team as well as the girls U15 team after my team’s practices. My second year of U12, we only won one game which went to an eleven-man shootout. I stopped every shot in the shootout. I still practiced with my brother’s U16 team and the girls U15 team after my own practices. This past year, I played both Junior Varsity and Varsity hockey. I pushed myself to become the best player I could be. I was the first one on the ice and stayed after practice every day.

I also pushed myself academically, earning a 4.0 GPA taking all honors classes. I think that playing three sports, participating in band, choir, and taking honors classes has taught me how to manage my time. This year I earned the Hustle Award for tennis as voted on by my teammates for being a hard worker and having a positive attitude. I also earned the Tiger Award for hockey as voted on by my teammates for being a leader, a role model, a hard worker, and for always having a good mindset. I was also nominated and chosen to be a member of the 2020 Wall of Inspiration at Albert Lea High School. Some other achievements include, Standout Student, and Student of the Quarter.

Next year, my goal is to be the starting varsity goaltender. I am working hard in the off-season to reach my goal. I feel that my strengths are my height, quickness, reaction time, and strong work ethic.

I hope you consider me for your team as I am dedicated, hard working, and reliable.