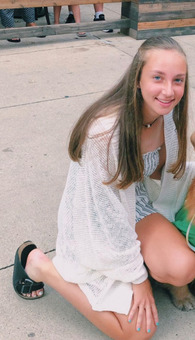 My collegiate goals and aspirations are to put tremendous effort into becoming a starting player at an academically competitive college while maintaining a high GPA. Ultimately, I would like to earn a Pre Med degree in order to achieve my dream of becoming a Physician. In order to prepare me for my future career in medicine, I joined the Aspiring Medical Professionals of America Club in 2018, and am still a part of the Athletic Trainers program at Neuqua Valley High School. My passion for soccer developed the moment I could kick a soccer ball. My creative playing style, speed, skills, and vision of the field afford me the ability to control a game, and create scoring opportunities. On the soccer field, I am a very versatile player due to the fact that I used to play goalie, have played both outside and center mid fielder, and have been a defender for many years. What sets me apart from other soccer recruits in character, is my determination, coach-ability, and leadership style.

Off the field, I am devoted to giving back to my community. In 8th and 9th grade, I held a candy drive for the troops and raised over 1,500 LBS of candy (the most ever raised by an individual student in Illinois) which I donated to Operation Support Our Troops of America. I am continuing the drive this year as well as throughout my high school career. From this drive, I was presented with the opportunity to be featured on Wildcat Weekly, Neuqua's weekly news channel, as well as present during Neuqua's annual military service. For the past 3 years, I have held an annual fundraiser called "Support Our Heroes In Blue," which collects thank you cards from younger kids in our community and food donations, which I deliver to my local police department in order to show them how much we appreciate their heroism and sacrifices. My passion for animals and several years of volunteering at the Humane Society have led me to start a pet sitting business, which has grown to over 100 clients. I also have a lot of persistence, which is why I am currently a member of Star Raiders at Neuqua Valley, an advocate group that goes to elementary schools to present the issues of drugs and alcohol in the community. Finally, while attending Crone Middle School, I received the Crone Leadership Award, which is only given out to two individuals annually. I was also chosen to present during an athletic ceremony, and graduated with a Presidential Award for my high academics.

I believe that the harder you work, the greater the results, which is evidenced by my current 4.1 GPA which I first obtained throughout my Freshman year of high school, while playing for Eclipse Select, a nationally recognized, very competitive ECNL soccer club. Currently, I am a part of the Honors/AP program at Neuqua Valley and the recipient of the French Consulate's Competition in Conjunction with Chicago's Ala Carte Food Festival First Place award for my reflective writing entry in 2018. Just recently, I was inducted into the French Honor Society. Very few students are afforded this privilege due to the extremely selective process involving not only high academics, but a commitment to maintaining fluency in French. This past semester I was endowed with Neuqua Valley's highest honor, when I became a 2020 Neuqua Honors awardee. This recognition is for students whose contributions to leadership, service, equity, and spirit define the most important aspects of success and achievement at Neuqua Valley. My final semester of sophomore year has been challenging to say the least. With a global pandemic, I had to switch to full time e-learning and holding myself accountable more than has ever been required of my education. I ended the academic year with not only a 4.125 GPA, but was awarded the Remote Learning All Star award, for outstanding academics, and my commitment to learning.

As a U-15 player, I was allowed the opportunity to play up one year with the Eclipse U-16 age group, a National Quarter-Finalist team. During the spring of the 2019 season, I played on Neuqua Valley's Varsity soccer team as a freshman where I earned an Academic All Conference award. During the 2019-2020 season, as a U-16 I am playing with the U-17 Elite National Team at Team Chicago. Last summer during my off season, I organized and ran a successful soccer development camp (Footloose Soccer Camp) for a large group of kids ranging in age 4-8. This was a wonderful experience and opened my eyes to the influence that a student athlete can have on the next generation of soccer players.

Although, remote learning is continuing into my Junior year, I'm proud that Covid hasn't deterred me from wanting to be the best version of myself. Not only am I a starter on the 2002 Elite Team as a 2004, but I've also continued to succeed academically. Recently I was inducted into Rho Khappa Honor Society, and selected as an Executive Board Member, out of numerous candidates, but I've also had several articles published for my school newspaper. For examples of my work, please visit nvhs.echo.com.

I thrive under pressure, and perform my best in a competitive environment. The college that I attend where I can make my dream of being a student athlete a reality, will have my guarantee that I will always give 100% on and off the field, and the team will be gaining a leader that will work tirelessly to ensure that we all achieve tremendous success.