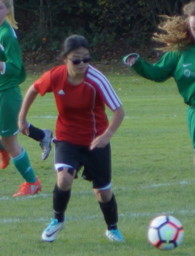 I have attended international schools for my entire education. Growing up and learning in such a unique environment has influenced who I am as a person and has opened doors for me and my future that I might now have otherwise had access to. I have traveled to Asia and Europe to compete in cities like Beijing, London, Vienna, The Hague, Paris, and Munich, making my athletic experiences unique as I have played against multiple skill levels and nationalities. I have experienced sport in Europe, China, and the US. I started soccer in 2nd grade and went to numerous tournaments in China competing against other international schools alongside children from all around the world. Later, in 6th grade, I moved to Cairo, Egypt, where I currently attend Cairo American College. In middle school, I joined the soccer team and also committed to an extra-curricular program to play more soccer, which not only elevated my playing abilities but exposed me to all different types of soccer players.

In high school, I earned a spot as the only freshman on the Varsity starting team. That year, I went to the International Schools Sports Tournament (ISST) championships in London where my team placed 4th without our beloved coach due to unfortunate complications with his visa. During my sophomore year, I once again made the starting line up and traveled to the ISST championships in Vienna. At the end of year awards, I was named the Most Promising Female Athlete of the Year. In my junior year, not only did I make the travel team again but I was selected as a captain, which is usually appointed to a senior.

In addition to soccer, I also participate in other sports: horseback riding (10+ years), basketball (5 years), softball (1 year), Frisbee (2 years), and track (3 years). By participating in multiple sports, I have learned a lot about myself. I am organized, competitive, communicate well with others, and have a strong work ethic. As I look to my future I'm seeking a program that will not only be a good fit for me athletically but will support my academic aspirations as well. As a five-sport athlete and captain, I know that I have the strong work ethic and leadership skills to make a positive impact on your school’s program.