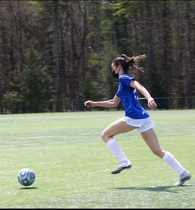 Hi, my name is Alyssa Keane. I am currently a senior in the class of 2022 at Dedham High School in Dedham, Massachusetts. I first started playing soccer at 4 years old for Dedham Youth Soccer and immediately fell in love with the sport.

I began playing club soccer for Global Premier Soccer (MA) when I was 8 years old. I played for GPS’s 2004 MA State Elite team up through the 2019/2020 season, competing against ECNL and NPL teams. I was captain of this team for four years. Due to the COVID pandemic GPS had some issues in the summer of 2020 and eventually went out of business. I ended up signing on with a former GPS coach (Ricky Newton) on the FC Stars of MA in July 2020. My FC Stars team won the USYS MA State Cup in 2021.  Starting in the fall of 2021, I will be playing for the FC Stars U19 ECNL Regional team.

I first played high school varsity-level soccer when I was 13 years old when I was invited to play with the Dedham High School varsity summer team the summer between 7th and 8th grade. I have been a starter on the Dedham varsity soccer team since I first became eligible to play as a freshman. I was the team’s leading scorer as a freshman with nine goals and seven assists, and second leading scorer as a sophomore, with 10 goals and seven assists. I was named a second team Tri-Valley League All Star in both my freshman and sophomore seasons, and I was chosen by the coach to be a captain for junior year.  Because of the COVID epidemic, our season was shortened and I was only able to play in three games my junior year.  I'm really looking forward to the my senior season and have been chosen to be a captain again.

As a team captain, I believe in leadership by example and have always strived to set a good example for everyone on the team by being one of the hardest workers out there. I typically play attacking mid, but also play forward regularly. Although I’m right-foot dominant, since I was very little, I’ve been fortunate enough to be able to strike equally well with both my right and left foot, so I’m comfortable on either side of the field. I believe my strengths include my speed and quickness, my work ethic, my vision on the field, and my soccer IQ.

I have always taken my schoolwork very seriously, and I take all Honors and AP courses and currently have a 4.51 weighted cumulative GPA and a 3.75 unweighted GPA.  I am interested in becoming a dentist or dermatologist.  I'm looking for a challenging academic environment where I can continue to play the game I love at the highest level.

I truly believe that I have the work ethic, talent and leadership skills to make an impact at the collegiate level, and I look forward to hearing from you. Thank you for your consideration.