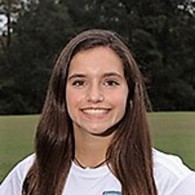 Growing up, I played many sports and was generally good at most of them.  I am not sure how I settled on soccer, but I knew I didn’t like sucking in my stomach and pointing my toes in gymnastics.  I gave up swimming when I realized I would never finish better than second to my sister.  Softball was OK, but it was a bit slow and there were too many cheers to learn.  I didn’t try basketball and volleyball until middle school because I am a triplet and my parents couldn’t get us to any more activities.  From an early age, though, I always played soccer!  I liked the action, I loved being around my teammates, and I scored a lot of goals.

Our family moved to the Houston, TX area in 2015 and soccer helped tremendously with the transition.  While in Louisiana, I was part of a strong club (Mandeville Soccer Club) and a good team.  All my teammates were committed to the sport and our team enjoyed good success in the state of Louisiana and regionally at the Premier Level.  It was hard to move and I was sad to leave the team.

Finding a soccer club in our new community was more difficult than I thought.  The two clubs with the best reputation in the area were quite a distance from where we lived and I knew it would be hard to balance my time between school and soccer.  The first club I tried out for was not a good fit and I left the field crying.  The other club was even further away, but by coincidence they were forming new teams in my town.  While I decided to try out for that club, I knew I would be taking a chance because it was a new team, we would be competing at a lower level than my former team, and I had no idea if the team would be good, bad, or terrible.

I joined the new team and it turned out to be a great decision.  I quickly made friends and they were very welcoming.  Although we competed at a lower level, the transition forced me to become more of a leader on and off the field.  I was named one of the team captains and I improved my game on the field as well.

In 2016-17, I was the only freshman to make the varsity team for the Kingwood Mustangs.  Many of my club teammates were on the team and that made the experience easier.  I was a leading scorer on the team.  It was an amazing feeling to score our only goal and game tying goal in the Texas High School Playoffs that eventually helped our team to regionals on penalty kicks.

I love soccer and want to continue my soccer career in college.  I have been able to balance soccer with my academics and managed an 4.0 GPA (unweighted) my freshman year.  I am in many AP and Pre-AP classes including Human Geography, Biology, English, and Geometry.  With my advanced classes, I have a weighted average GPA of 5.3.  I am ranked 23 out of 697 students.

I am undecided about my college major but I want to attend an institute that offers competitive academics, as well as, athletics.  I would really like to push my abilities in both areas.  I still can’t beat my sister at swimming, but I do know I would be a great addition to a college or university and its soccer program.