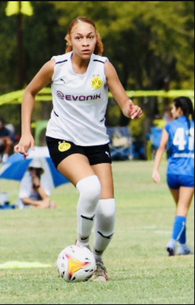 Not your average soccer story!

I haven’t always played soccer or any sport for that matter. I was signed to an agency for modeling and acting at age 11 and began performing at small shows singing. But I quickly realized that wasn’t what I wanted to do.

At age 12, beginning of my 7th grade year, my father signed me up to play recreational soccer. I fell in love with the spirit of competition and all I knew is I wanted to win, but we never won a single game. During that 1st year I was spotted by a local club coach who asked my dad if I would be interested in guest playing in a tournament, but I would be playing up an age group. Apparently he saw potential. “Speed And aggression can’t be taught, she can learn everything else.”

5 years later, now in my senior year have 5 letters! I took my junior year off.  Varsity soccer and track as a freshman.  I have received all distric honors in soccer as a freshman and sophomore. Varsity volleyball, soccer, and track as a sophomore. UIL 5A regional qualifier in the 200m. Selected  for the North Texas ODP team and voted co-captin of my club team as well.

In addition to my athletic achievements Im taking AP classes and enrolled in the “Avid Program” which prepares you for success in college.  I plan on obtaining my BSN. I am currently working towards my field as I have already obtained CNA ( certified nursing assistant) Certificate.

I’m most thankful for lessons I’ve learned by losing. Most people, I assume, would have given up with all the disappointment and obstacles I’ve faced along the way by starting as late as I have. Although I am grateful for my natural athletic ability, my willingness  to overcome adversity, i believe, is my strongest asset.

Thank you for reading a little bit about me. Hopefully I can be an asset for you in 2023!