College Coach? Click here to view all of Nina's information. 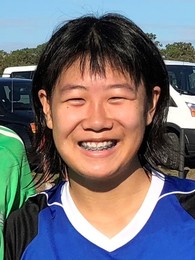 I am currently 17 years old, and my life has always been with soccer. I came to New Jersey from Japan when I was three years old, and at the age of five, I started playing soccer. My initial goal was to get used to the new world. Through soccer practices and games, I learned English language and made new friends.

At the age of nine, I joined my first club team, Pipeline Soccer Club when I further moved to Maryland. This team was newly formed for my age group. As a center midfield player, I found it a great fun to play soccer as a team sport. Receiving and delivering passes forward were a great way of communication to establish mutual respect.

Since then, I have really gotten into soccer.

Finally, I moved to Wisconsin in 2012, and I have played in six different teams including club teams, a high school team, and the Olympic Development (ODP) team. In the ODP team, I was able to play as a side back during the 2015 and 2016 seasons. When I was a freshman in high school, I played as a forward. Although I am certain that center midfield is my favorite and best position, playing in different positions and roles definitely helped me improve my positioning and tactics as a center midfielder.

I think my strength is ball control and strategic game making. I always think and try to pass the ball forward at the right timing. On the other hand, I have some disadvantages in physical plays as I am not a tall player. In order to overcome the relative physical weakness, I have been working out to strengthen my core. During games, I try not to keep the ball too long to avoid being surrounded by opposing players.

Along with athletics, I am working hard on academic side of my life since my goal is to study medicine and to be a physician. Therefore, I would like to play in a college team with one of the academically highest ranking. I believe playing soccer in college would certainly make my college life fruitful. I would like to pursue my career goals in college, postgraduate education, and profession. I have determined that I will keep my best effort to achieve my goals.