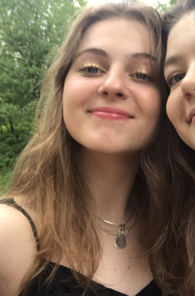 My name is Olivia Anton & I have been competitively swimming for 10 years on AGUA, Asphalt Green Unified Aquatics.  In addition,  I've been on the Varsity team for my school,  Fieldston that is located in Bronx, New York.

When I was at summer camp after second grade, I realized that all the best swimmers on our team trained year-round. I wanted to do the same. My father was a competitive Swimmer & Water Polo player at Brown University and I really look up to him. He encouraged me to join AGUA,  the the best program in Manhattan, to be healthy and make life-long friends. The sport of swimming now has become an important part of who I am and I love to compete. I really can’t imagine not swimming and I look forward to competing in a College at the highest level possible.

This Fall,  I really trained hard and was looking forward to all the upcoming meets in January.  I was able to compete with my Varsity team and we made it again to the   IVY Prep States where we broke the pool & team record in the 200 Medley with a 1:48.74.  I wasn't able to finish the meet and was sick on and off with flu like symptoms up until my Final exams.  I was really looking forward to competing and seeing my new times.

In addition to swimming, I’m a film major & have completed several short films. I started in the Performing Arts at a young age, acting at the Lee Strasberg Institute of Theatre & Film and participating in Summer Theater events. After securing some small modeling jobs, and what felt like hundreds of rejections for acting jobs, I auditioned and landed my first movie role at 11 years old. It was a film written & directed by Jordan Galland entitled- Ava’s Possessions. I really loved the experience playing young Ava. It was a non-speaking role where I had to bite a blood pellet and have blood dripping out of my mouth and onto a vintage dress. I only had one shot to do it perfect—and thankfully I nailed it. I also performed in an Off Broadway show as a 12 year old and gained real world experience as to how productions are created and managed from this role.

When I reflect on the night of filming Ava’s Possessions, what I loved most was being part of the story telling. I took pictures of the whole experience with my eyes-- the color of the sky that night, actors in makeup, the set decor, the cameras & the operators and even eating breakfast at night because of craft services on a film schedule. That experience instilled in me the strong desire to be behind the camera and tell my own stories.       Thankfully, I learned about a very special program run by the Ghetto Film School in the South Bronx. I was so excited about this fellowship which allows teenagers to study film making and to pursue their passions at a young age. The program is taught by first class instructors and students learn how to use professional grade equipment. I applied to the program in May of 2018 and presented samples of my scripts. Fortunately, I was chosen as one of 35 fellows from over 300 applicants.  My fellowship ends Summer 2020 and I was chosen as the Producer for the Thesis Project as the Producer with a budget of a $150,000.

In addition to my coursework in film, I was also selected for a Mentorship program to learn the business side of the film industry through the Erika Olde Foundation. I have weekly phone calls and assignments to study the financial and marketing aspects of film.  I just completed the program this May.

My focus on film  definitely runs very deep.  In fact, many times, I was told by outsiders that I couldn't do both my passions swim & be in the Performing Arts. Indeed, there were times that it was pretty overwhelming but I have what my family calls, "Antonitude" which a never give up spirit to push through it what seems impossible.  When I was 13 years old, I was inspired to write about an iconic clown face image in Asbury Park, New Jersey which I developed into a 60 page screenplay. I worked for two years to make the film entitled “TILLIE” in the fall of last year. The short film is a teen horror/thriller which was mostly shot at the Jersey Shore. The film is my longest to date at 25 minutes and has won many awards including The Garden State Film festival and even made it all the way to win at film festival in Apulia Italy.

One other important part of my life is community building. In 2015,  my Grandfather died and he was buried at a traditional Jewish cemetery. When I visited the cemetery I learned that the Congregation was mostly made up of older people and the cemetery was in disrepair. The fence surrounding the cemetery was in especially bad shape. I decided to raise money by selling hand painted Birdhouses to replace the cemetery fence. The entire community got behind the initiative and I enjoyed this work so much that with the help of my parents, we created a 501c3 called Birdhaus of Interlaken. The charity has evolved and we do art therapy for women that are battling various stages and forms of Cancer in New Jersey. We have an Instagram feed @birdhauscommunity where you can see the work we do.

Thank you for the thoughtful time & consideration getting to know me and I in turn and would love to hear more about your school and see if there is a fit.