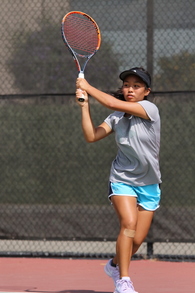 Tell coaches about your collegiate goals and aspirations?

“Congratulations to ʻIolani School freshman, Denby Nagata, and Celeste Inouye this yearʻs 2018 ILH (Interscholastic League of Honolulu High School Girls Doubles Champion. That year, I was named the Star Adverterʻs ILH Doubles Player of the Year. The ultimate rush of winning the ILH High School doubles championship as a freshman was amazing and I will strive to be a champion again in college.

I first picked up a tennis racket at age five in the small town of Hilo, Hawaii. I won my first sanctioned tournament at age nine.    In awe of my victory, I promised myself that I would practice hard to make sure that I could experience those feelings of accomplishment once again. I trained seriously and competed in local, state, and national tournaments. At the age of twelve, I was ranked 2nd in the State of Hawaii. I qualified for the Winter National Tournament in Tucson, Arizona. There, I was announced as the recipient of the prestigious Sportsmanship Award.

The pinnacle of my career has been winning the ILH championship as a freshman. Since COVID hit, I have not had the opportunity to defend my title or win more high school titles but I strive to do so in my last year of high school and in my college career.

What makes you a good candidate for their team?

“Denby, just try your best and have fun” resonates in my mind every time I step on the tennis court. Before every match, my mom would reiterate this to me. I would use this to motivate me and calm myself down during competition. When the competition got fierce and players would cheat or lie to win, I was always shocked (but not necessarily surprised) to know the lengths players and parents would go through to win.  When I would lose, I would joke with my mom and ask her if that is what parents tell children who never win! I was taught to work hard, never forget to try my best, to have fun, and to never do anything to jeopardize my reputation. I will be that player who will practice harder than the rest, have fun while doing so, never disgrace my team, and push others to be the best version of themselves.

What marks you different from other recruits in character athletics and academics?

Big things come in small packages.  For reference, I am 4ʻ11”; this is most likely the height of many girls in 6th grade. I have always been considered shorter than the rest, but I have not and will not let this restrict me from reaching my goals. This shortcoming, no pun intended, motivates me to push harder than the average height tennis player! I am the unassuming, underrated, underestimated academic and athlete that will surprise and amaze you.