College Coach? Click here to view all of Jonathan's information. 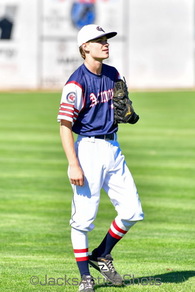 I strive to be a model student athlete by achieving success in multiple sports while maintaining an exemplary GPA and continuing to be recognized as a leader in the classroom and community.   Long-term, my goal is to play baseball collegiately at a top academic institution and, when my baseball career is over, become a physician either as an ER doc or as a sports-medicine specialist helping other athletes to overcome injuries and continue competing at a high level.

I’ve been blessed to experience baseball at the highest levels as a member of CC ARMOUR, the Rockies Fall Scout Team, the 2017 & 2018 Northwest team at the USSSA All American Games (Direct Select both years and designated 2018 top prospect from the Northwest Region), and the USA Mountain West team at the 2018 National Team Identification Series.   This summer, I’m once again playing for CC ARMOUR, which is an elite team coached by Hall of Fame coach Marc Johnson that draws the most talented class of 2022 players from across the State of Colorado. In the fall, I’m scheduled to compete against top National high school players as a member of the Senior Rockies Scout Team which is coached by members of the Colorado Rockies scouting staff/Diamond Club Baseball and comprised of the very best talent in the state of Colorado and surrounding areas as selected by the Rockies scouting department.

I believe my coaches would describe me as a good teammate who works hard, is coachable, and is liked and respected by everyone including coaches and parents.   Definitely not the biggest, strongest or even fastest on the team but a grinder who competes which is why, on a team of the biggest players in Colorado most of whom were full grown men which on average outweighed me by 50+ pounds (I have put on ~20 pounds in the last six months), I played in every inning that mattered.   While I may be undersized (currently 5’10” and 155# but still growing), with good measurables but no one single one that jumps off the page, I’m very athletic and strong for my size with wiry fast twitch muscles.   Off the baseball field, my athleticism is demonstrated by the fact that in 8th grade, with only one year of wrestling experience, I placed 2nd in the 125 pound weight division helping my team win a State Championship.   I’ve also enjoyed success in football leading my 8th grade team as the starting QB to a district championship then, my sophomore year in high school when baseball scheduling conflicts no longer made starting as a QB feasible, I switched to safety and was selected Defensive MVP by my teammates and coaches.   In the outfield, my athleticism together with the ability to read the ball of the bat allows me to play error free ball and make, on a routine basis, the diving plays that rob extra bases and have a way of changing the momentum of a game.   Although a regular starter in either CF or RF, I’m often called upon to the mound in a relief situation.   What I lack in raw FB velocity I make up for in control and ability to deliver a plus quality changeup and curve ball/slider for strikes.   My coaches know that in pressure situations I will work ahead and force hitters to put the ball in play.   What truly sets me apart as a baseball player is my ability to consistently deliver a quality at bat hitting for average (usually out the two hole), with a middle of the field approach and gap to gap power.   My productivity at the plate is demonstrated by the fact that I led CC ARMOUR last summer hitting .402/.480/.495 vs. the team average of .305/.413/.382.   Notably, out of 125 plate appearances I only struck out eight times for a SO rate of 6.4% which was less than half the team rate of 16.8%.   I excel against speed and actually improved as the competition intensified batting .500 with an OPS of 1.202 at the PG 2019 WWBA 2022 Grad National Championship where I was named to the All-Tournament Team (Batting).

My ability to consistently deliver at the plate and willingness to grind in order to help my team win earned me the nickname – JONNY BALLGAME – from my CC ARMOUR coaches and teammates.   I experienced similar results during the fall on the Junior Rockies Scout Team as evidenced by the fact I’ve been honored with a promotion to the Senior Rockies Scout Team and will be one of the only juniors on this fall’s Senior Scout Team.