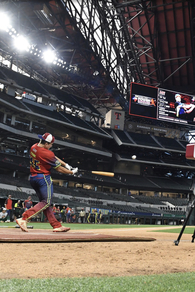 As a 17 year old Junior I always try to compete at the highest levels possible both on and off the field and also give back as much as I can through helping younger baseball players and doing charity work around baseball.  I did a charity for Type 1 Diabetes for Home Runs That Help and raised over $3000.00

I enjoy the team environment and reaching our goals together.  My freshman year as the starting Varsity catcher for our High School team we won the Regional and State Championships.  It's the first time our school has achieved a Class A State Championship in Baseball and even though we were a younger team and not picked to win we didn't let that hold us back and together as a team worked hard to the goal we all wanted.  I also started attending events where your individual skills are measured and evaluated.  For example:  I won the National Power Showcase Home Run Derby held in Arlington TX home of the Texas Rangers in 2016 and also won the Maine Home Run Derby at the Beast Of The Northeast Tournament in August 2017 then in 2018 I won the Perfect Game Home Run Derby at JetBlue Park in FL along with Babe Ruth World Series Home Run Championship made the Babe Ruth World Series All Tournament Team.  I was also just selected as a Perfect Game Underclass All American and Top Prospect by Perfect Game.  And since the events this Summer with Perfect Game I now have a PG Grade of 9.5 and also ranked #1 in my state for position and overall, and Nationally I am now ranked top 500 and #37 for Position.   I've been selected to the Baseball Factory All American Teams January 2018, 2019, 2020 and this January 2021 for High School Juniors.  I’ve also just attended the XDS World Series 18U in San Diego CA  and our team won the Championship and I also won the World Series HR Derby (Woodbat).  What I love most is playing with a team, meeting new players and competing as a team and everyone working together for one goal.  I consider myself a great teammate who will always do whatever it takes to help the team accomplish its goals.  I believe you gain respect from your team and coaches not only through your performance but also your actions on and off the field.

My goals are to play with a High Division Baseball program and earn a degree while playing for the school I attend.  My dream is to play baseball for as far as it will take me but I also know with my degree I will be able to obtain a great job before, during or after I reach my ultimate goal.

Nic Frink is a 2022 C/RHP, 1B, 3B, OF with a 6-1 190 lb. frame from Scarborough, ME who attends Scarborough. Strong with a big proportioned frame and easy to see his present strength. A primary catcher with sound footwork and squares well to throw. Pretty quick transfer with a consistent release and accurate with his throws. Popped a 1.94 and will continue to get better with added reps. A right-handed hitter with big bat speed and real strength to his swing. Leg lift that is timed well, fast core rotation, ball jumps to the middle and pull side. Easy raw power that will be very usable. Good barrel skills with a good overall profile.

Nic is a pure catch and throw backstop who also will make an impact with the bat. Behind the dish, he presents a soft/sure mitt showing great pocket awareness sticking pitches. Quick lateral movements allow him to center/deaden pitches in the dirt off of a soft chest. Runners will not want to test his cannon for an arm (88 mph) with impressive pop times of 1.98. Offensively, he continues to shine with tremendous hitting abilities with pro level power potential. He has athletic/smooth actions with fluid rhythm to load. He gets good hand separation and delivers the barrel with leverage, resulting in a barrel explosion (98 mph exit velocity) with the ball screaming off of his barrel. He did show on the mound for 1 inning with fastball topping out at 82 mph with arm side run. Breaking ball displays 11/5 shape with late break. With 3 years to further develop, Nic has the makings of a special type player and will get looks from the top collegiate coaches with his baseball abilities.

07/09/2018 - Interactive Video Program - Portland, ME Nic showed well at both positions and at the plate during his workout in Portland. Behind the plate, Nic has soft/presentable hands, active feet, and he fields in a square position. He works around the ball well, keeps it in front when blocking, and has a clean release with a strong arm to 2nd base. Pop times were as low as 1.98 seconds. At 3B, Nic has good pre-pitch actions, soft hands, and active feet. He fields athletically, gathers himself well, and he throws with a quick release to his target. Offensively, Nic has an aggressive swing, good balance, and he loads well. He has explosive bat speed, makes hard contact, and has power in his bat.

09/26/2018 - Arizona Freshman Fall Classic Nic continues to show the makings of a special type player. At the plate is where he shows best through an athletic setup. Hands are quick (91 mph exit velocity) through a level swing path. He has strength in his swing with baseball jumping off the bat when centered. Power is best shown to the pull side. Behind the plate, feet are aggressive and active as he works in line to his target, through a clean transfer / exchange as he gets rid of the baseball quickly. Throws are accurate with pop times improving as he continues to build more arm strength through a long toss program. He shows a solid setup behind the dish with a soft glove action that sticks balls in the zone. Blocking skills are solid as he utilizes his body well and keeps all balls in front.