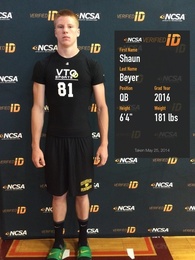 I have verbally committed to the University of Iowa. I have also received offers from FBS-Nebraska, Iowa State, Air Force, and FCS- NDSU, UNI, ISU(Redbirds), WIU, and SDSU.  I was the INA 2015 4A Captain All-State and was named to the 4A First Team Offense- Utility and The Gazette/KCRG-TV9 All Area (all classes) Player of the Year.  I was also named All-District 5 Co-Offensive MVP  as well as First Team Offense - Utility I play on both sides of the ball as TE, WR, QB, HYB, and Punter. I had over 1500 yds rushing/receiving with 16 TDs,  I led 4A in punting with a 44yd avg, and I led the team with 7 sacks.  My team was 13-1 this season and was runner up in the Iowa State Championship game.  I have the honor of holding 7 new school records this year and was selected as Athlete of the Year at my high school.

2014 Post season honors include All-District First Team Offense, The Gazette/KCRG-TV9 All Area (all classes) Football Team-Offense, All-Metro First Team, and All-State 4A Second Team-Offense. I was named in Iowa Preps Sports Rivals for Juniors to watch during the 4A playoffs for both Offense and Defense, and they also named me Junior MVP for defense for District 5 as well as Junior All-State Second Team-Offense. I tied the school record for 3 touchdown receptions in one game.

Track- high jumper (PR 6'8") long jump, and hurdler. In 2016 I qualified for 4 events at both State and the Drake Relays.  Placed in all 4 events at state (2nd in Long Jump & Shuttle Hurdle, 5th in 110HH, and 6th in High Jump. Drake (all classes) 4th in long jump, 2nd in SH, top 10 in HJ and HH). Drake In 2015 I qualified for 3 events in the Drake relays, at State 3 events as well, I placed 3rd in Class 4A for High Jump, 11th for high hurdles (missed top 8 by .02s) and 4th in shuttle hurdle relay.  In 2014 I placed 3rd at 4A State in high jump, my shuttle hurdle relay took 2nd, 17th in high hurdles, and I was voted JFK Sophomore MVP. Area coaches selected me for the All-Metro 1st team for high jump and shuttle hurdle relay, and 2nd team for high hurdles. In 2013 I finished in the top 10 at State in 4A high jump and was voted Freshman MVP.  Freshman and Junior year wrestling received All-Metro Honorable Mention, senior year went out for basketball.

May 4, 2015 I was inducted into National Honor Society. In the classroom I have a 3.92 cumulative GPA and have been on the Honor Roll every trimester with a rigorous class schedule including AP courses, Assuming my AP and College credit scores qualify my senior  year, I will bring 27.5 credits into college. My last trimester GPA was 4.22. I have taken Student Government and have volunteered with several different youth clubs and at charity events.

My goal is to play in college at the highest level possible and I am interested in obtaining a degree in Business and plan to obtain my MBA as well.