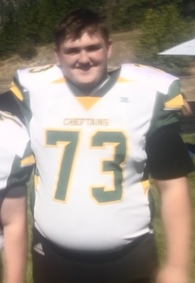 My main Goal is to attend a 4 year University and play Football at the highest level I am capable of.

My current GPA is 3.92. I am taking Honors English, Honors US History, Spanish 3/4, Pre-calculus and Integrated Math 3. My plan is to graduate HS with the most amount of college credit possible. My college plan is to Major in Mathmatics and Minor in Sports Medicine. I consider myself a very hard worker and having great work ethic is very important to me.

As a Freshman I worked very hard and earned a Starting position on the Varsity team playing Defensive Nose Guard/ D Tackle. I was awarded by my coaches the  “Rookie of the Year”.

My Sophmore year, i again played Varsity, i started as the offensive Center, as well as started on the defensive line playing Nose guard/D Tackle.  This year i was honored by my coaches with a “hitman award”.

During the summer, leading into my junior year,  i had the amazing opportunity to share the knowledge i acquired through working with Coach Linnenkohl, owner of Linepro Lineman Training, while helping coach at  his “block hunger” Lineman Camp. This lineman camp was for 2-8th graders and was attended by multiple Professional Lineman from the NFL. It  truly was great experience that lead me into a leadership position on my own team. I was able to use that experience to help my own teammates throughout the season, teaching them techniques and drills i learned, then taught.

My junior year, i was Honored to be elected by my Coaches and Teammates to “Team Captain”.  I earned a starting position on both offense and defense again this year.  I started the season playing right guard but as the season went on i was moved back to center, as that is where the coach needed me most.  I also started every game on Defense at D Tackle/Noseguard.  I was awarded with a Football honor being placed on the 2nd team all conference, for my Lineman play. At the end of the season i was awarded and was named “Lineman of the Year” by my coaches. I was also awarded the “Golden Gnome” (the highest award our team has)  which represents all the characteristics  my coaches want to impose, they are “selflessness” “integrity” “finish” and “brotherhood”.

I am currently 6'  tall and weigh 275 lbs. I practice defensive end, and offensive guard and tackle (right and left), as well as Center and Dline.  I work as hard as possible to make as many contributions to my Team as i possibly can. I have been told by current Coaches and previous Coaches that I am very "Coachable". This was my 7th year playing football.  I pride myself in being the hardest worker on the practice field. Other attributes that I think are important are: Honesty, Loyalty, and being a very Respectful person. I regularly attend Grace Baptist Church in Rogue River, Or.

Going into my Senior year, I am 100% committed to the weight room.  I will also be working with Coach Linnenkohl from Linepro Lineman Training in Portland Or.  throughout the offseason.  I plan on attending every camp and workout i possibly can, continuing to  improve my skills, techniques, and knowledge.