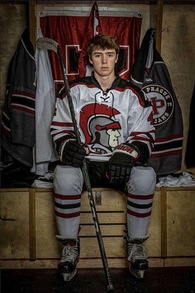 My name is Ryan Brinkhaus. I am a left defensemen in my junior year of high school playing my second year of Varsity hockey for New Prague High School in Minnesota. I have been playing hockey for 11 years, however it feels like I've been playing forever. I'm looking forward to playing another year of Varsity hockey with New Prague, and then continuing on to post secondary hockey while I pursue a college degree in Criminology.

I was first introduced to the game of hockey at age 5, and each year my love for the game has grown more intense. As far back as I can remember, I've hoped to continue playing beyond my youth and high school Varsity hockey years, so I remain fully committed to continuing my hard work both on and off the ice to improve and strive to get better in preparation for future opportunities.

My youth hockey experience was a very exciting but difficult road. New Prague is a small rural community south of the Twin Cities by about 30 miles. Youth hockey districting worked out in such a way that New Prague youth hockey was placed in district 6 (arguably the most competitive youth hockey district in all of the US) playing up against the very best players and teams Minnesota has to offer. While it was discouraging at times, losing the tough games so frequently, I feel it provided a meaningful opportunity to learn and to grow into a stronger player (mentally and physically) that can compete at a higher level. It too fueled my desire to continue my play beyond youth and Varsity hockey.

My first year, I was the only sophomore player that earned a consistent starting role on the Varsity team. The hard work I put in throughout the season paid off with an invitation to try out for CCM High Performance Tier 1 team. I was selected to that team.

I am passionate about the game, and it translates with my performance on the ice. Some coaches have said that I'm a hard worker, a smart player, a great passer, tough as nails, a fighter who usually wins the pucks in the corners, loyal, kind, and the kind of player every goalie wants near his crease.