College Coach? Click here to view all of Blake's information. 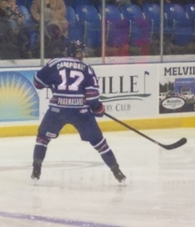 First and foremost, I love this game! I dream of one day playing in the NHL, and winning The Stanley Cup.  Every kid probably dreams this same dream, but I am from the warm weather state of Texas, not really hockey country.

A little background on me.  Somewhere, stamped into my DNA, is this incredible drive to play, to be a kid, and to win.  It doesn't matter if it is 5am.  If it has to do with hockey, I bound out of bed, because I just can't get enough.  The smell of the ice, and the thought of the glassy surface of a fresh sheet gets my adrenaline pumping.

When I was 2 years old, I went to my first Dallas Stars game.

I played in-house hockey from age 4 to age 8.  I also played Little League Baseball, and did golf camps.

One day when I was 8, I begged my Dad to take me to a 6am Stick and Puck the next day.  My Dad said, "If you wake me up at 430am, then I will take you and we'll skate".  I had no alarm clock, and barely slept that night.  I woke my Dad at exactly 430am, and we went to the rink and skated together.  That day, a coach named Karson (who was on the ice, giving a different kid a lesson) told my Dad that he liked what he saw. Coach Karson has been a guiding light in my life ever since!

We didn't know anything about Travel Hockey, so we found an entry level program, and I played 2 years of Squirt Travel Hockey at the Select level, and then one day I knew I needed a higher level of training.

I had seen older kids engaged in very high level hockey training at the rink with Coach Karson. I asked my Dad to see if he would train me.  I was accepted as one of the youngest kids, at age 11, to join the IceJets Academy, a 1,000 hour per year training program, built upon an advanced education, and a flexible schedule.  I spent 3 years training with kids 3 years older, much bigger and stronger than me. I was small for my age, and I struggled and almost quit hockey because I knew I was small.

One day I had the opportunity to talk to one of my NHL heroes, Steve Ott. A friend of our family told Mr Ott about me and he called me. I was completely in shock because I never expected to get a call from an NHL star! Mr Ott told me that "the fight is inside the dog" and told me to imagine a little chihuahua chasing a Great Dane. The chihuahua doesn't know he is small, and the Great Dane is scared to death, yipping, and running away with his tail between his legs.

I used that thought to start my day, and before every game, and I never felt small again!  I am forever grateful to Mr Ott for giving back to help a struggling youth hockey player! He kept me in this game I love so much!

I continued to train with the IceJets Academy until it closed down when I was 14.

Each day after Jets Academy, if I didn't have a work out or team practice, if my homework was done, my Dad would drive me across town to a mini rink, called Hockey Ambitions, to let me play 3 on 3 hockey at night, or to practice shooting in the shooting lanes.  I would try to juggle teams and playing levels to get as many small ice 3 on 3 games as I could.  I think it taught me to see the ice better, and to make plays in really tight spaces.

I bloomed really late. At age 15, I was 5ft 2, and the smallest player on my U15 Elite team. I had always been a Forward but my game was shifting to defensive due to my size.

I am now 6ft 2, and 170 lbs. Looking back, being small, and passed over on many opportunities taught me the value of hard work, persistence, and perseverance.  My Dad (a former USAF Pilot) always told me to focus on training and on skills, and my time would eventually come when it was supposed to.

I have always had to outwork others on and off the ice, and I don't plan to stop anytime soon.

I just graduated from High School, and last year I played Juniors for the Mid Cities Stars NA3HL, as a Defenseman.  I felt like Juniors would allow me to make up some lost time, by allowing me to compete against bigger, more physical players, than in U18 Tier 1.

I also played 3 years for my High School, grades 9, 10, and 11 on the Varsity Hockey team as a Defenseman and a Center.

I am now a smooth-skating, puck moving, right shot, offensive-minded D, with a great first pass. I love creating offense and I hate getting beat.

I love helping my team to win, and I like being used in critical situations like taking a critical faceoff, adding to the attack, special teams (PP or PK), or the shootout. My coaches affectionately call me "Soupy" or "Clutch".

When I am not on the ice, I can be found working out, working on my game, or spending time with my family and friends.

I am so lucky to have great parents who believe in me, and who support my hobbies as well as my dreams.

I also have 2 younger brothers who also play hockey, and I love to shoot pucks outside, and help them with their game.

I am now trying to determine my path forward to reach my dreams.  It's hard to know what path is the perfect one to take to play pro hockey so I am trying to focus on training and on getting bigger, faster, stronger.

Don't get me wrong, I have big aspirations.  I would love to have played Major Junior hockey. I would also love to some day represent my country in World Juniors or the Olympics.

Due to blooming late, I believe my best path is to play College Hockey. I also believe that it is important to get my education.

I would love to compete for an NCAA Championship.

Right now, I am just trying to learn as much as I can, and am trying to stay focused on development, and on being the best teammate I can be.

Aside from the game of hockey, I believe that I can help a program by being an upstanding role model.  Coaches and teammates tell me that I am a natural leader, and that I have excellent work ethic, and that I push players around me to be better.  I always give 110% in everything I do, every drill, every shift, on and off the ice!

Thank you for taking the time to read about me and for reviewing my profile.  I am eager to learn about programs where I can be of benefit, and where I can continue to develop!