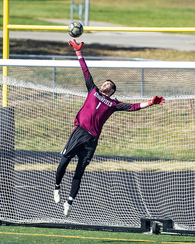 I hope to play a high level of college soccer and go on to play professionally.

At the end of last season I transferred to the Sereno Soccer Club 02 Boys Rideout ECNL team and despite only playing in their last 7 games I only let in 2 goals and then kept 5 clean sheets in my last 5 games. I went in as second half goalie and did not get scored on. In the last game I was promoted to starting goalie and again kept a clean sheet through the first half where I finished the game as the original goalie went in for the second half.

I understand that I have a lot more to learn but am ready for the hard work.

I started in half of the high school varsity soccer games this 2017-2018 season for Verrado High School as a sophomore - sharing time with a senior goalkeeper.

I was nominated All Region 1st team goalkeeper with a W-L-D record of 6-2-0 conceding 3 goals in the 8 games.

I pride myself on not only shot blocking and PK saves, but also on distribution by passing with both feet as well as throws.

To me practice is just as important as a game and I don't like it when other players either don't take practice seriously or mess around. Outside of practice I enjoy hanging out with my team mates. We have bonded well and I think that has helped with our play on the field. So while I take practice seriously, I still understand the need for team bonding and the other players have accustomed themselves to my personality as I have to them.

I am interested in several subjects at school including forensic science, engineering as well as an interest in sports journalism and soccer commentary.

I am entering my junior year and  will be trying to match colleges with my subjects along with locations of MLS teams. I plan on attending college ID camps this year that match interests in both soccer and study.