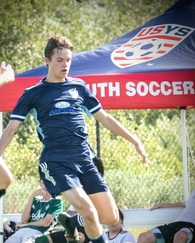 I've played soccer since I was 3 years old always at the most competitive level I could. I grew up in Waco Texas, where I played for North Texas ODP, and a competitive academy level team for four years, staying with them for another two years at the club level. This club then merged with the Dallas Texans club, which I played for until I moved to Montana in 2017 where I am now. I am currently playing for Blitzz FC and Montana ODP. Playing college soccer has always been my goal for my soccer career, at the highest level I can.

As far as describing character goes, I will always do what is best for the team. In my career I have played many different roles in team chemistry (captain/second in command/ or just a hard working player) based on what the team needs. I have had the most experience as a leader, having been captain of all of my teams except for one, but I am willing to take a back seat if it is best for the team. I always give my best every practice and every game, while also adjusting my play style to my coach's feedback and the team's personnel. I will play any kind of striker, whether it be a target player or a hold up forward, winger, or just plain center forward, although I do have the most experience playing striker in a 4-4-2. My most unique quality is finishing. This is a quality that I've found most people don't fully appreciate, but is critical to every team. Normally I wouldn't put a claim that bold in a statement like this, but I have been a part of too many teams with a forward who cannot finish to let it go unsaid. I take PKs for my teams, and have only missed 1 in game, along with scoring 35 goals in my past high school season.

Academically, I have been educated in classical schools since 2nd grade, but since my grades are already able to be viewed by the public I will not elaborate too much. Though classical schools like mine (Petra Academy) are typically smaller, they offer outstanding education, especially since academics go hand-in-hand with athletics at my school (as an example, all of my classmates play sports except for one). This education style has also taught me mental toughness, which has helped me in sports tremendously.

Because of my experience and upbringing, I am confident I can compete at high levels of play and continue to develop into a great player.