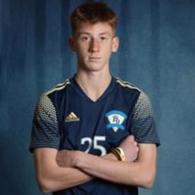 While soccer is my favorite sport, I also have played almost every sports at a high-level such as AA lacrosse including earning the right to compete in the World Series of Youth Lacrosse in Denver, travel basketball including two championships, district baseball, ice hockey including two championships, and a number of other less organized sports (snowboarding, surfing, diving and mountain biking). Being a multi-sport athlete who usually plays on two or more teams at the same time requires not only peak fitness but also significant discipline to balance competing demands including performing academically in a very rigorous, highly-rated school district.

I am a starting center back for the 2005 Boys Real Jersey FC team, which competes in the National League. Before the pandemic, we traveled to National tournaments in North Carolina, Las Vegas, Nevada,  St. Augustine, Florida, West Virginia and more. We also compete throughout the year against some of the best teams on the East Coast, which helps raise the level of our play.  In 2019 we won the New Jersey EDP State Cup for Flight 1 and qualified to go to the National Championship in Denver, Colorado. However, we had already committed to West Virginia for the USYS Eastern Regional Championships. We had a very successful year and at one point were rated the #1 2005 Boy's soccer team in the country!

I also am a starting center back on the 2005 New Jersey ODP team.  We play other state ODP teams in our region including traveling to Williamsport, VA for a regional tournament where we played very well against four other state ODP teams and I played almost every minute of all four games.  I was selected for the team again this year having tried out for the team twice (2019 & 2020) and making it both times.

As to my high school team, last year as a freshman I was the starting center-mid on the JV team leading the team to its best record in years with 10 wins.  This year I was the only Sophomore on varsity and I earned a starting spot alternating between right wing and right back depending on the team we faced.  Our team had its best season in over twenty year with a 12-1-2 record losing only the first game of the season.  We won the South Jersey Group 3 Championship, which was the farthest any team could advance due to COVID (no state championships).

My personal goal is to play high level collegiate soccer at an institution with strong academics that best prepares me for future success. I am interested in serving my country after graduation in the military, and am currently a member of the Air Force Auxiliary Civil Air Patrol. I want to be part of a program that values hard work, discipline and has an appropriate balance between athletics and academics. My size, speed, physicality and technical ability come from cross-training for many years. I believe that my success as a multiple sport athlete gives me an advantage over other soccer players who haven't developed the skills to compete and win in any environment.  I look forward to bringing my passion and skills to the collegiate level!